This version of scrapple is more user friendly! It does not contain the usual pork offal, trimmings, head meat, heart and liver that the original was made from. Some even cooked the whole head. Scrapple came from the Pennsylvania Dutch and was cooked down, cornmeal added to thicken, poured into loaf pans and left to set up. It was then sliced and fried.

Some of the old German family butchers around here still make pan pudding, similar to scrapple but thickened with steel cut oats. I buy some from my butcher Kah Meats the they call grits. I buy it a couple times a year to fry for breakfast.

I have wanted to try scrapple for a long time and looking around the net I see a lot of recipes for the scrapple made with good meat. They use cut up pork butt, along with smoked sausage or fresh hocks. You could use smoked ham hocks and I would think it would have a ham taste. I chose to use ground pork and smoked sausage to make it as easy as I could.

I used two pounds of ground pork and a pound of smoked sausage. I boiled it in water with some sage for 1 ½ hours. I had cut up the smoked sausage in short links and split one side for the fat to render out better. After the 1 ½ hours I removed the smoked sausage and chopped by pulsing in my food processor.
I added it and the seasonings back in and cooked another ½ hour then stirred in the cornmeal. It was poured into loaf pans a let set overnight in the fridge.

I saw where you could put parchment paper in the bottom leaving some on the end to make it easy to pull out after setting out. Forget that; it did not work even after loosening the sides. I ended up banging it on my cutting board as usual.

I fried a slice of it this morning along with some eggs for my breakfast. I was not too hungry so only fried one slice. It was so good after eating wished I had done two slices. I will vacuum seal and freeze most of the two loaves for later breakfasts.

Some of the ingredients 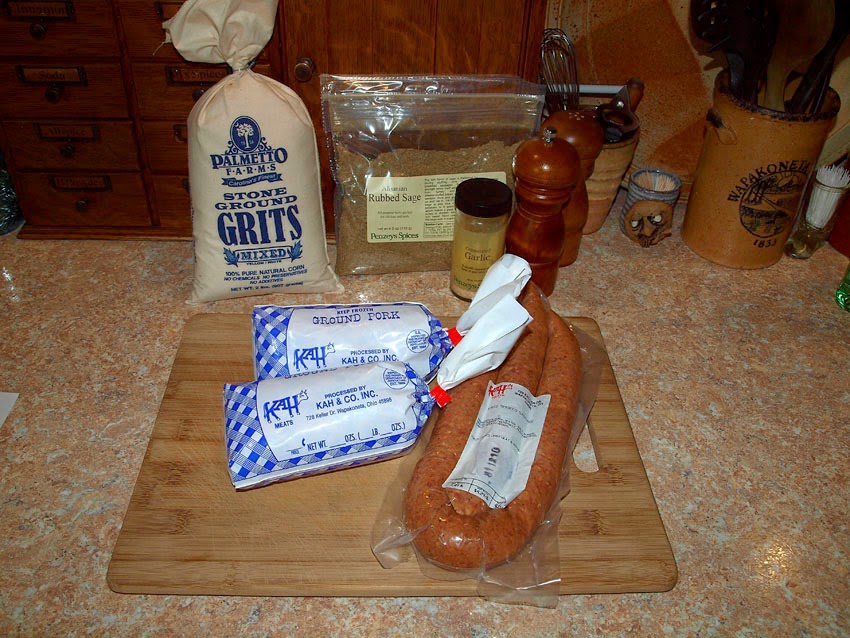 Meat in the pot with water and sage 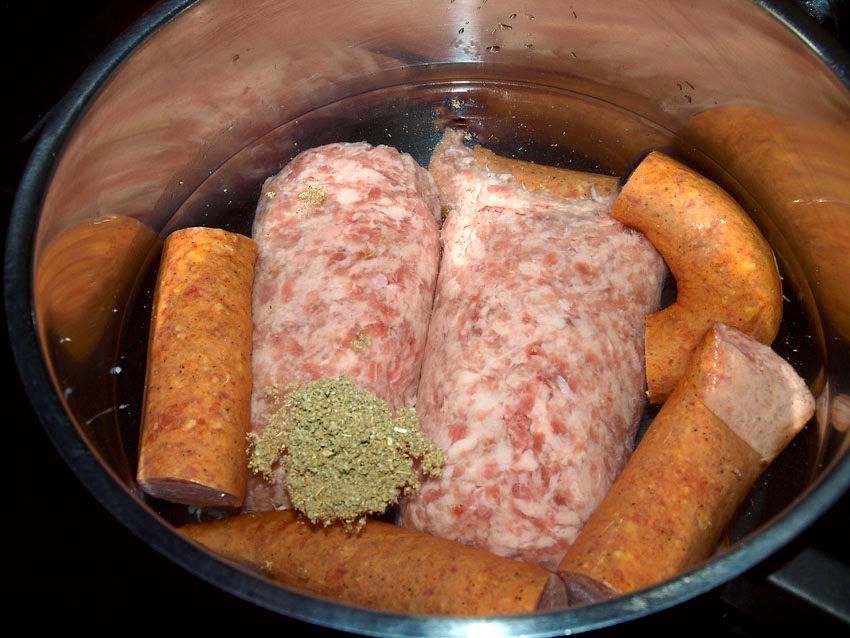 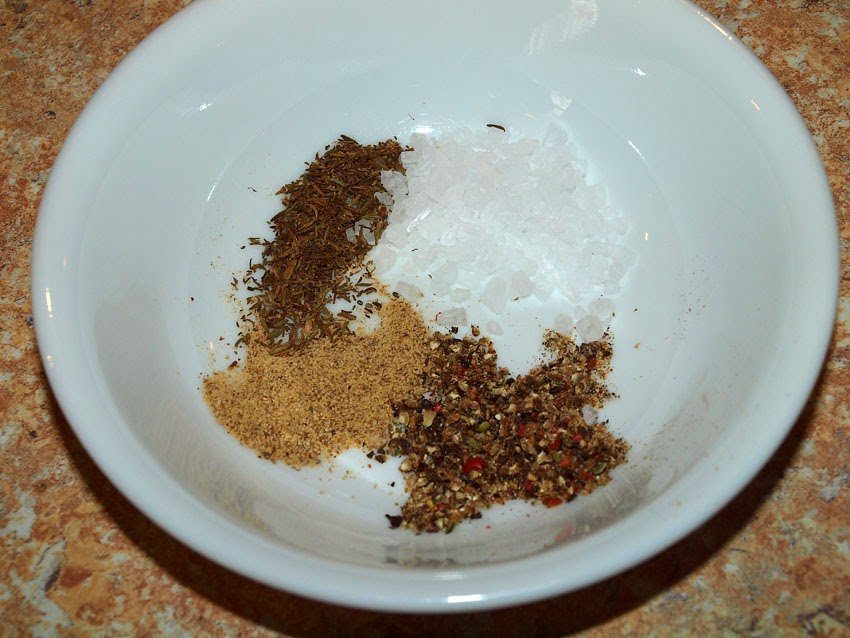 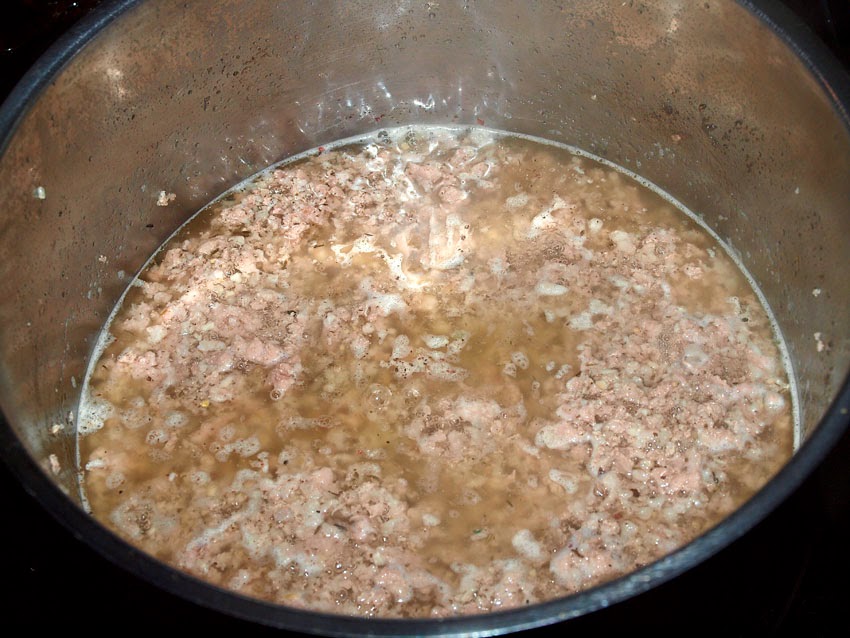 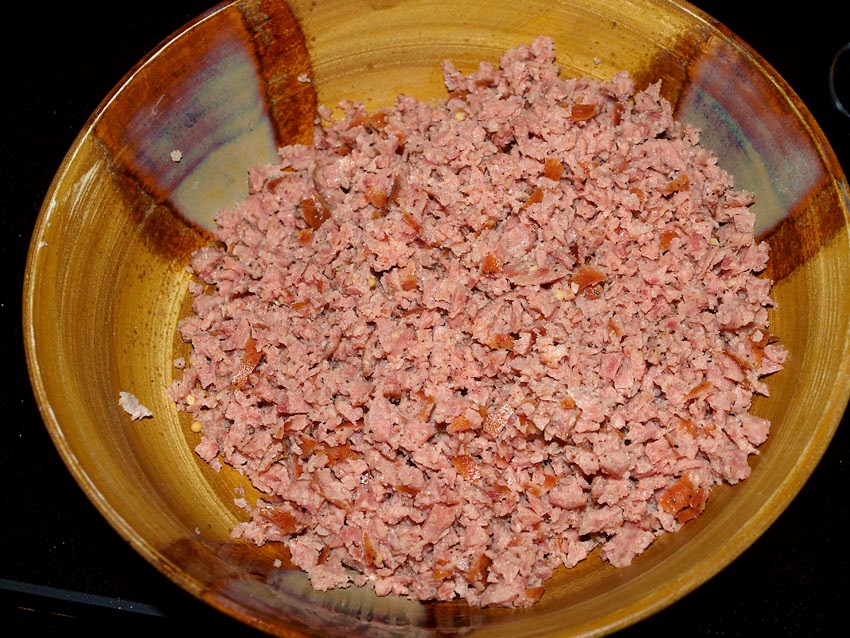 All in with the cornmeal to thicken 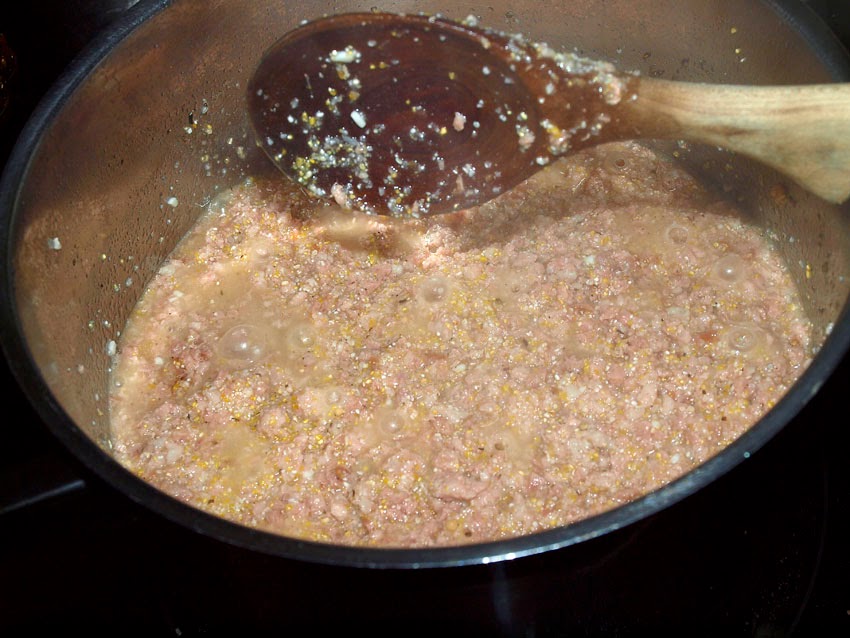 In loaf pans to cool 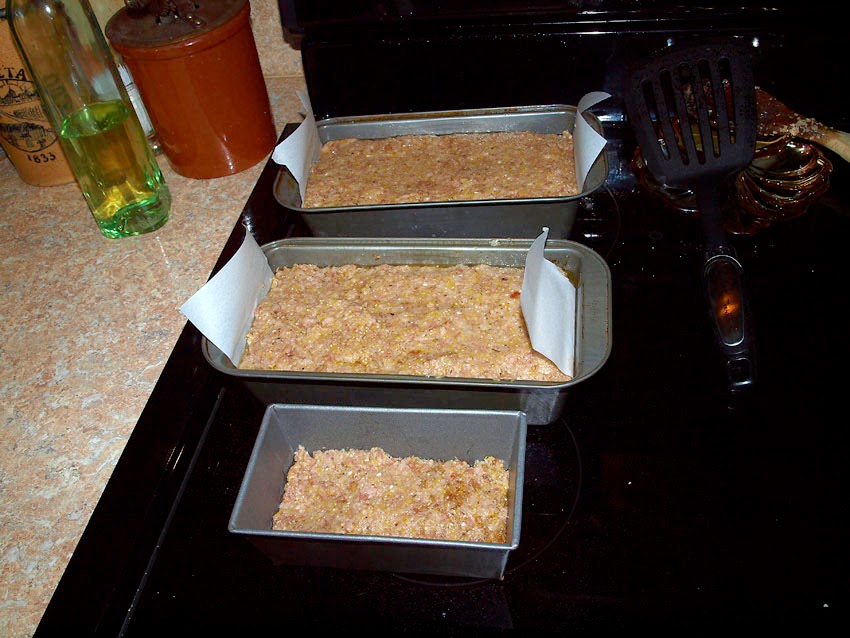 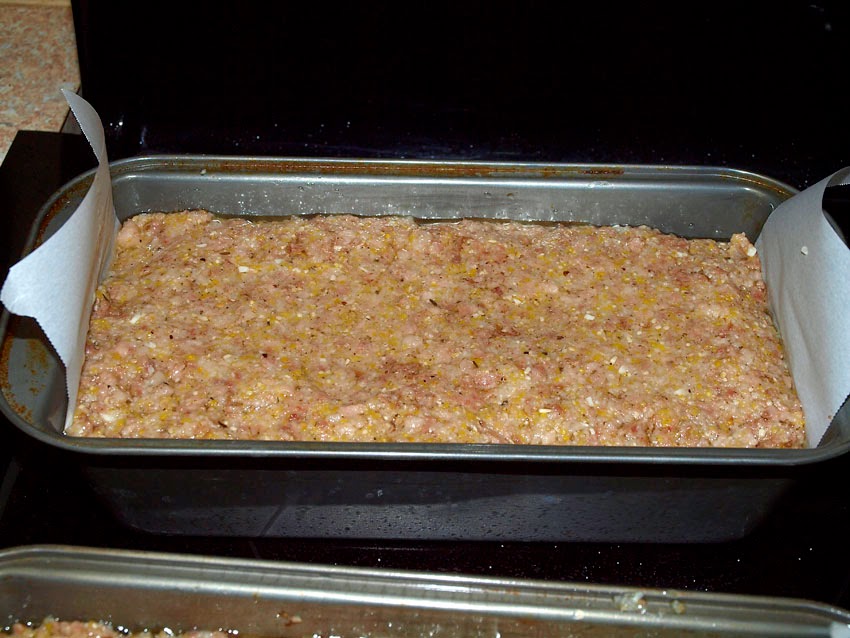 A slice for my breakfast 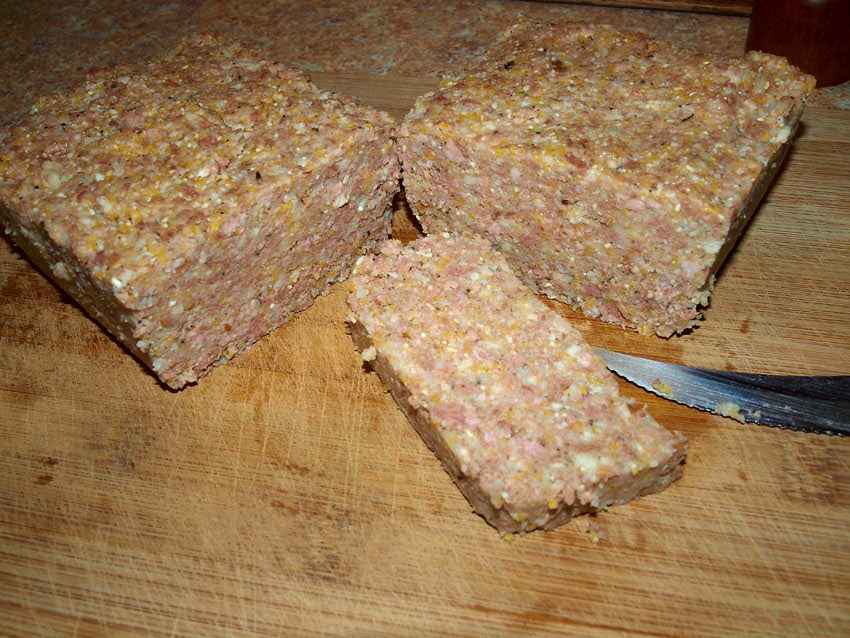 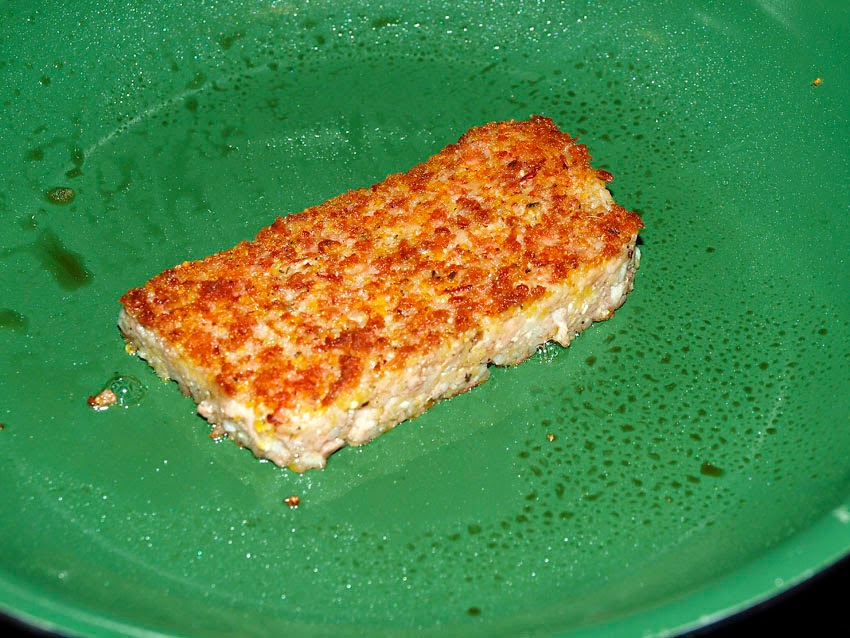 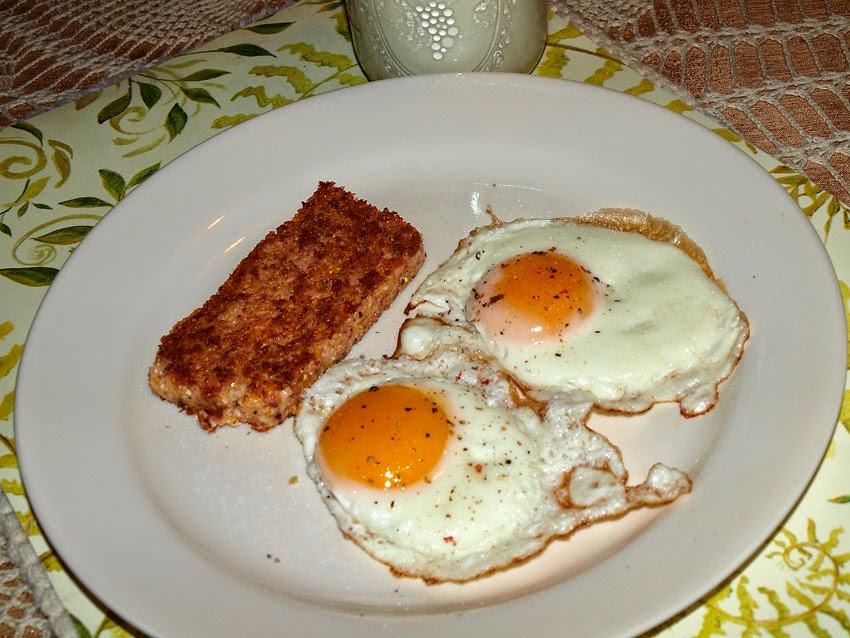