Sheet pan dinners have been the craze this winter on food magazine sites and food blogs. I don’t know why I never thought of this before. It’s a simple way to cook a whole meal with very little prep and cleanup. I use nonstick foil on the pan and cleanup is even easier.

I found a recipe to follow for a kielbasa and pierogi dinner. The recipe was for 24 pierogi, I only did 6 and it had chili powder as part of the seasoning, I have never had pierogi with chili powder. My kielbasa was from my butcher Kah Meats, no preservatives, just meat and seasoning.

I got the oven preheated to 400 deg. While it was heating up I laid the sausage around the outer edge of the pan. I brushed both sides of the pierogi with butter and placed them in the middle and added a little salt and pepper. I added the peppers and onions that I had drizzled with olive oil and the seasoning around the pan and topped the pierogi with the slivered onions.

It went in the 400 deg. oven for 15 minutes and then I brushed the pierogi with more butter and turned. I didn’t look like all was browning to suit me so I switched the oven to convection for the last 15 minutes. It all looked good to me so I got it out to serve. If it doesn’t look brown enough just put it back in for a while.

The wife and I both had salads with a hardboiled egg and some tomato. I had some mustard with my kielbasa and it all tasted great. The mini peppers are a lot sweeter than the large ones. This is a keeper recipe for me.

I didn't show pics of the prep, I figure you all know how to clean peppers and cut up onions!

All ready for the oven 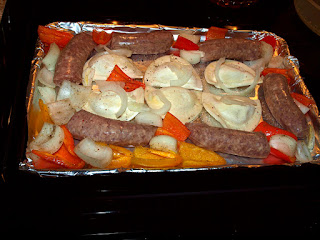 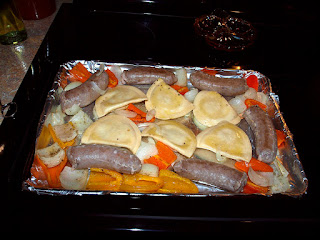 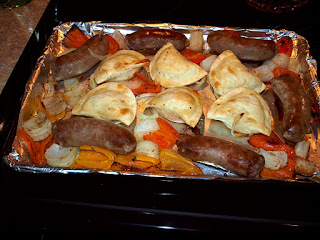 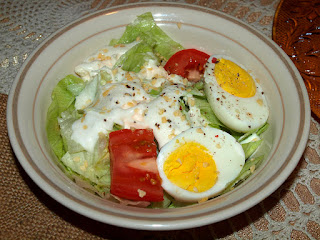 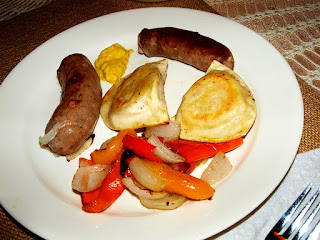