I seasoned the Stargazer skillet with Crisbee cast iron seasoning. I have cooked in it twice and was very happy with the nonstick quality of frying in it. It turned a dark brown instead of black. I noted after my first cook there were some light spots; I thought some of the egg whites or flour I used had stuck. It was still smooth and used some 0000 steel wool to see if they would come off but did not.

My second cook was pork chops and fried potatoes and all went well; no sticking at all. After cleaning with hot water and a blue Scotch pad, which are non-abrasive, it looked like most of the brown had come off the bottom. It was a grey color. It looked like the seasoning was coming off.

I had got the idea of using the Crisbee from Jeffry B Rogers, the Culinary Fanatic, who is pretty sharp on cast iron. He had used it on a Stargazer Skillet and I never saw any results on his UTube site but found on his Facebook page he had the same results after his first cook. Some of the finish had come off.

I am not sure what I will do, I just did a seasoning using my grapeseed oil on top to see the results. I liked the results so I am going ahead and do it over the top with the grapeseed oil. I have it in now for a second round and will do at least 4 and maybe 6 times total.

I did it 5 times and quit there it looks pretty nice. Now I need to cook with it and see how it holds up. If it doesn’t I will strip it in my self-cleaning oven and start over; I think I will try the old Crisco if I do.


I fried my lunch in it today. I did 2 batches of bacon then fried 2 pieces of cornmeal mush. I had a bone in pork chop to fry for a sandwich. I was going to pour off the ¼ of bacon grease but decided to shallow fry the chop. I did it for 5 minutes per side. The sandwich was great; I had gotten the idea from my BBQ forum Lets Talk BBQ. Everything fried up nice and after it cleaned up easily.

I am happy with the skillet and will cook through the Holidays with it and see how it turns out before deciding to strip and redo. 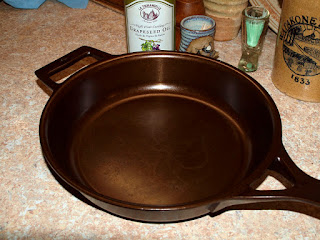 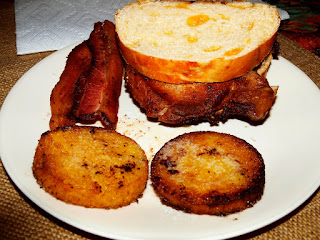 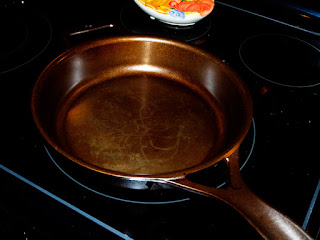