I did a brined spatchcocked chicken to pull for tomorrow night’s supper. I threw on some smoked jowl bacon to use for my supper tonight.

My wife went with her Aunt and a cousin to a progressive church dinner tonight. They went to 4 different churches for the courses. She said it was good.

I wanted a fried bologna sandwich and saw a perfect side to experiment with. I saw on Wing Commanders blog a Rib Cocktail he made up. Wing Commander is a fellow member of LTBBQ. He had beans in the bottom of a glass, topped with slaw a slice of bacon and a rib with a ring of corn on the cob hung like lemon on the glass. Mine would be a little plainer with just 2 slices of bacon. I didn’t want to make a batch of slaw so I got a cup from Sandman when I got beer today. His is pretty good.

For the bacon cocktail I had a small can of Bush’s Grilled Beans, browned some bacon and onions then added the beans. I fried the old fashioned bologna on my Weber Spirit on grill grates and toasted the bun. My sandwich was a little mustard, a slice of Vidalia onion, the bologna, some bacon, a slice of Tennessee tomato and some more mustard on the top bun.

My cocktail was the beans in a ball pint jar, two slices of jowl bacon and the slaw. It looked pretty good. Surprisingly I thought the beans and slaw tasted good mixed together. Would I make it again; probably not but had to try it. Thanks for the idea Wing Commander. I knew the sandwich would be good!

The bacon about done 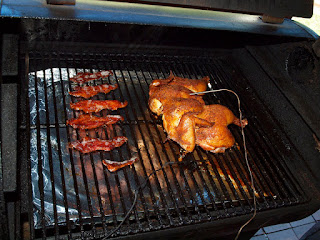 Bologna and buns on the grill 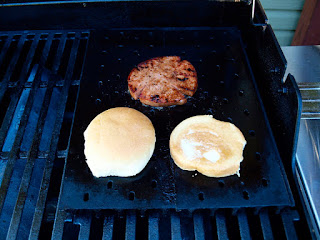 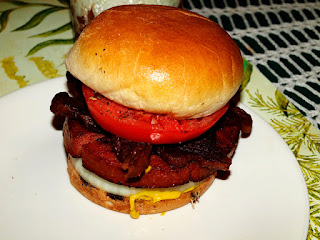 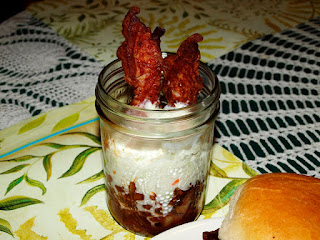 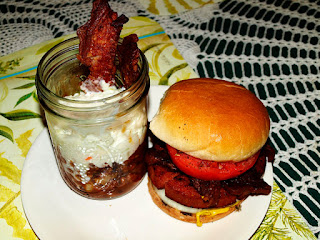 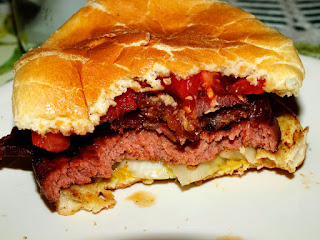