It was a nice day today; I got my Weber gas grill cleaned up early. I scraped it down, cleaned the grates and changed the drip pan. The grandson came down and helped me mow. It was just the second time he used my riding mower and did a great job. He watered my garden and flowers then we had some lunch. We had what was left of some venison summer sausage, some corn and Spanish rice. The grandson stayed a couple of hours playing games on the PC and then went home.

Supper tonight would be quick and easy. I had some leftover chicken and fried corn, about a cup of each to use, I added some sliced baby gold potatoes, 3 slices of Vidalia onion quartered and some green pepper. I would fry that up in my CI skillet, toast some soft corn tacos and have fresh salsa, store bought, and sour cream to add.

I did this on my Weber Spirit Gas Grill, not much advantage over using the stove top but I had my grill grates to toast the corn tacos on. I kept the heat out of the house and didn’t have to heat up a grill pan.
I heated up the grill on med. and it ran just over 400 deg. through the cook.

The wife and I both had two tacos, one with just salsa and one with salsa and sour cream. We liked them and the ones with sour cream were better. I think it enhanced the potatoes. Not your everyday taco but tasted good and used up some left overs! 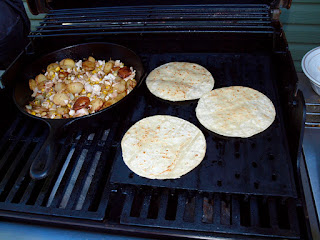 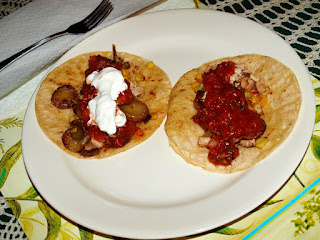