We had a great Father’s Day weekend even though a little warm. It looked like most of the US had nice weather.

After eating some good pizza Saturday we went to our son’s, sat on the patio and had a couple of beers.
I had planned on fixing a brunch Sunday at 11:30. I made Pioneer Women’s make ahead French toast casserole and would fix eggs to order. I used some Amish cinnamon swirl bread in place of her French bread. I tore up the bread in a greased 9X13 casserole dish and mixed 8 eggs, ¾ cup of sugar, 2 ½ cups of a milk and half & half mix and 2 Tbs. of vanilla. I poured it over the bread then covered and in the fridge overnight.

Sunday morning I cooked up about a pound of bacon on the Traeger. I mixed the topping for the French toast, ½ cup of flour, ½ cup brown sugar, 1 stick of butter a little cinnamon and some grated nutmeg. I spread the mixture over the bread egg mix and baked at 350 deg. about 50 minutes.

I served the bacon and French toast with some butter and Ohio maple syrup. While all were eating this I made some Taco omelets for four of us. I make them by adding a little olive oil spray to a skillet on med. high heat, add a soft corn tortilla, after a minute flip it then add a beaten egg. Swirl it around to even out the eggs, and then add your choice of peppers, onions and cheese. Let cook a minute then fold over and cook both sides 1 to 2 minutes. I used red and yellow peppers, green onions and some Seargento’s 4 State cheddar. I served the tacos with some red and green Herdez salsa.

My wife and daughter had scrambled eggs with cheese. Everyone liked my brunch, the French toast was very rich but we all liked it! I had my toast as Ree suggested a pat of butter on top and maple syrup!

The bacon and casserole 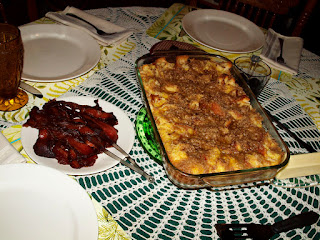 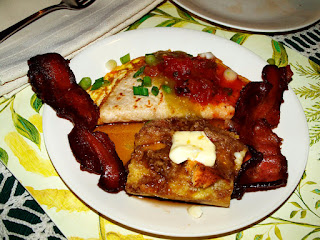