I had seen where someone used Cheez It crackers in meatloaf in place of regular crackers and raved about it. I decided to try them in some Italian meatballs I planned to have for our supper. Our son and wife gave me one of my Father’s day presents early, a cast iron garlic roaster I wanted to try for some garlic bread. You just have to have some good garlic bread with spaghetti!

I made up the meatballs early; a pound of ground chuck, a tablespoon of Penzey’s Italian sausage seasoning, one egg and a cup of Cheez It’s crushed. I covered with plastic wrap and then in the fridge until cook time. I spent the afternoon trimming grass with beer breaks!

The grandson came down at 4:00 to water the tomatoes and flowers for me. He said he would stay for supper; he called his Mom and she said sounded good and would come after work, our son was working.

I put the meatballs on the Traeger on smoke 185 deg. for about 50 minutes. I then pre-heated a cast iron skillet with olive oil on the stove and then out on the smoker and put the meatballs in it for about 15 minutes to brown some. I had turned the smoker to about 275 deg. grill level. I added my sauce; Newman’s Own tomato basil sauce, and was in another half hour. Total cook time about 1 hour 50 minutes.

With an hour to go I had fired up my Weber Spirit on med. about 400 deg. and added the garlic roaster. I had cut the tops off of two whole garlic bulbs, added some olive oil and a little salt. I used the gas grill to toast some rolls coated with butter and to grill the Romaine sprayed with olive oil. I had my pasta cooking inside and ready to serve all at 6:30. I had some balsamic vinegar infused with honey for the Romaine and parmesan for toppings.

We all thought it was a good meal but the verdict on the Cheez It’s was save them for snacks!  No one liked the meat balls that well. The roasted garlic was a hit with the wife and DIL. I think because it is a milder garlic taste, I like a more sharp garlic taste. 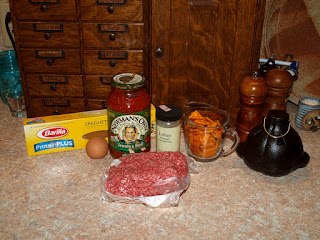 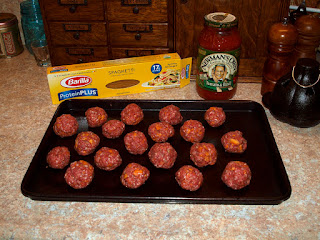 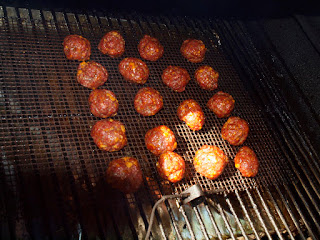 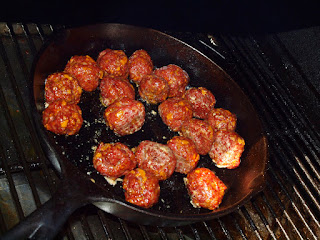 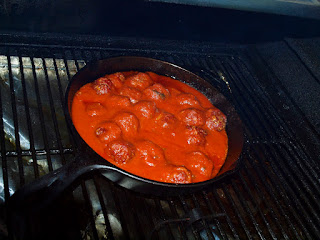 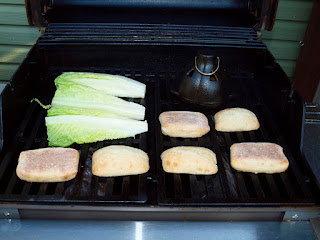 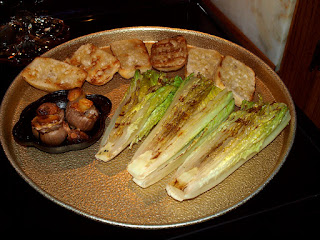 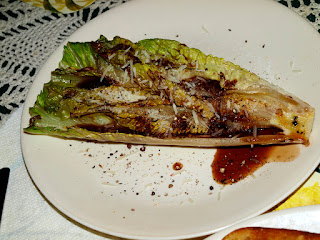 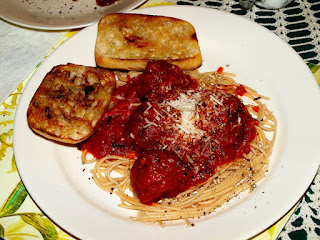