I had to try out my new Camp Chef iron griddle the wife got me. I had it seasoned and ready to go. There is nothing better to me than some smash burgers on a flat iron griddle. I wanted to grill some onions too and had Tennessee tomatoes and some asparagus for a side. I also wanted to try some limburger cheese on my burger, the wife wanted cheddar on hers.

I nuked two bacon slices to wrap the asparagus in and some seasoning with olive oil.

The griddle heats up pretty fast so started it out on Medium, after 10 minutes it was at 500+deg. so I dropped it down half way to low. I used my Maverick infra-red to read the temp and was down to 400+deg. so it was time to cook. I put the onions on with a little olive oil; let them start to brown a little then pushed them to the side and got the burgers on. I had 5 balls of 80-20 ground chuck I had seasoned with a little Pappy’s Choice. I had sprayed a little olive oil on the griddle, added the burgers, let them sizzle a bit then smashed them down. After 3 to 4 minutes I flipped them.

I added cheese to the wife’s; I would add the limburger spread to mine inside. I had just enough room to toast one bun at a time while the burgers cooked on the second side. I removed all and added the asparagus bundles to brown up the bacon and cook.

There were two patties for each sandwich. The wife had some of the grilled onions, tomato and lettuce on hers. I spread the limburger cheese spread on the bottom patty and added a good pile of the grilled onions to top off. I had a slice of tomato on the side. Those were great!!! After a few bites my wife said “now that’s a good burger”!

Next time for the asparagus I would wrap with bacon and pre-cook both some in the microwave since it was a little underdone. I was happy with the griddle, and glad I could push the onions to the side to cook a little slower and not get too done. The ideal griddle would be double over two burners to have a hot and a warm area but this one will work fine for the wife and me. I think you could get 8 burgers on it to cook for more. 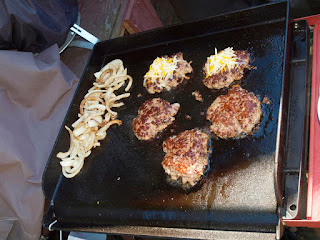 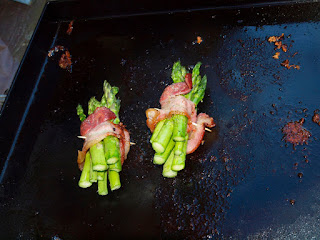 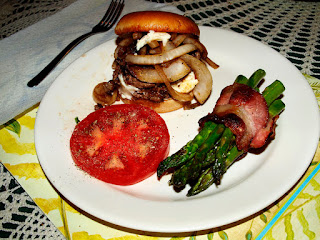 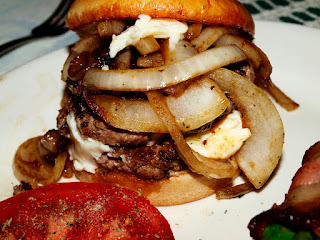