I found this recipe on Saveur.com and was courtesy of Sid’s restaurant located somewhere in Oklahoma.
It’s more of a method than a recipe and about the fastest burgers I ever cooked!

I was tired from mowing yesterday so spent a lazy day; hoed the weeds in my garden, watered some flowers and sprayed some weeds with round up.

Time for supper I heated my Weber Spirit to 400 deg. with Grillen Grates. I made two loosely packed balls from the ground chuck, about tennis ball size, and sliced some Vidalia onion thin for my burger, my wife just wanted cheese on hers. I nuked two small red potatoes in the microwave for two minutes, and then smashed to brown on the grill. I sprayed two buns with some olive oil to toast on the grill.

I had some Asian style veggies for a side, wild rice, edamame and carrots. When my grill was ready I put the veggies in the microwave and they would be ready when the burgers were done.

All was delicious and love the onions cooked with the burger. I added some mustard to mine and the wife had mustard and dill pickles in hers. Next time I would like two with the cheese in the middle. Sid’s used American cheese but I used some Sargento’s 4State shredded cheddar. I really prefer sliced Swiss but didn’t have any. 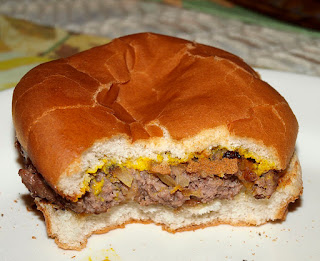 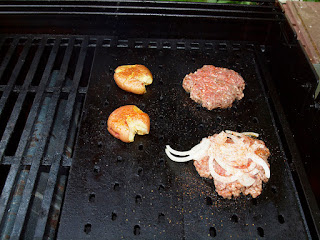 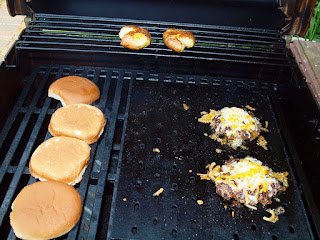 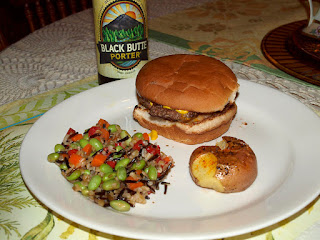