I bought some pork chops from my butchers Kah’s. We had been eating a lot of beef so needed a change. We like them with fried cabbage and pierogies makes it better yet. I had some store bought vacuum sealed thawed out to use.

For the chops I used and idea I borrowed from Jeannie at Cowgirl’s Country Life blog. You sprinkle on some Morton’s tender quick and in the fridge on a wire rack; an hour for thin chops and 2 hours for thick, then rinse off well and dry. For these I let them in for 1 ½ hours. When fried or grilled they will be tender and juicy.

I wanted to do the chops on my Weber Spirit grill on the back side of Grillen Grates. I did not want to be running back in the house to do the pierogies; there was just enough room on the grill for my Lodge CI skillet so I could do it all outdoors. My grill is just a step down from my smoking deck so I fired up my Traeger at 185 deg. I could throw the chops on there for a little smoke and they would be handy when I was ready for them. I seasoned them with a little Penzey’s 4S salt and fresh ground pepper.

I cut 3 slices of Kah’s bacon in a large dice, sliced a sweet onion and some cabbage in 1 inch dice. I had that ready a little before 5:00 and I had forgotten to bake my take home and bake bread. I got the oven heated up and baked it for 11 minutes. I had water ready to boil the pierogies for a couple of minutes.

I fired up my smoker then boiled the pierogies and drained then added a couple pats of butter to keep them from sticking. I fired up my Weber on med. high and had the Grillen grate and skillet in. I put the chops in my smoker. My grill was just over 400 deg. when I started frying the bacon and had the skillet a little too hot so turned that burner to med. low. I removed the bacon when it was brown and added the onion.

When the onion was starting to brown I added the cabbage in and a little salt. When the cabbage was cooked down some I added the bacon back in. I browned the pierogies 2 or 3 minutes on each side and added them on top of the cabbage. It was time to do the chops, that were close by in my smoker. I did them about 6 to 7 minutes per side. I added them to the top of the skillet and let get happy a few minutes. I carried inside and served the wife and me. Total cook time on the grill was about 45 minutes.

That was good; chops were delicious, tender and juicy! Using the skillet on the Weber was a little harder to control the heat but went pretty well. My cabbage was a little more done than I like but still good! The only thing that would have made it better was homemade pierogies! 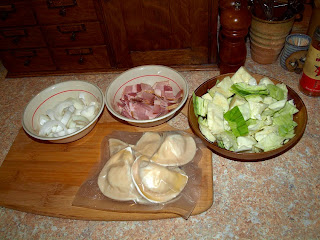 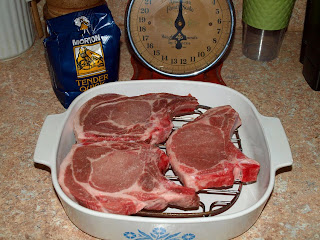 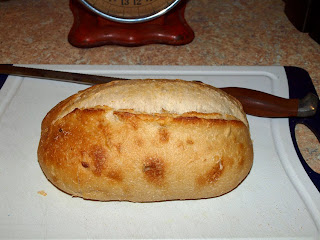 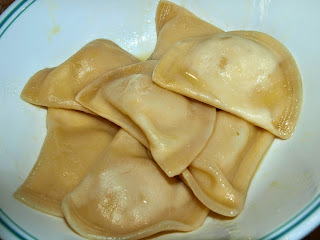 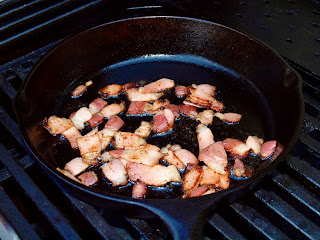 Onions in to brown 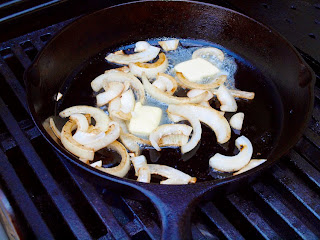 Cabbage in and bacon added back 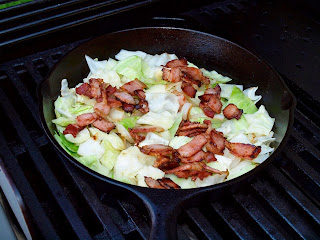 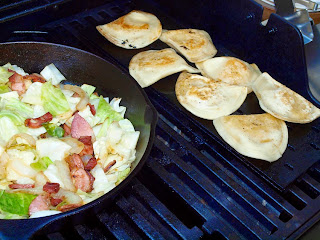 Chops in my Traeger near by 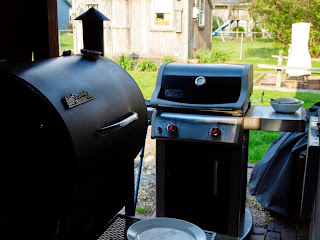 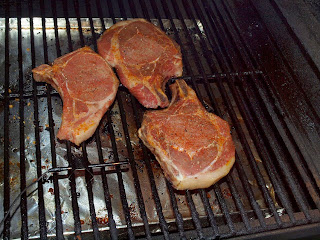 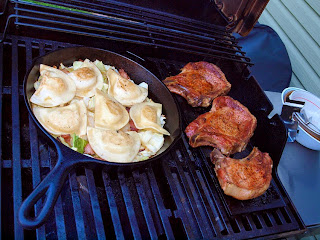 All getting happy, ready to serve 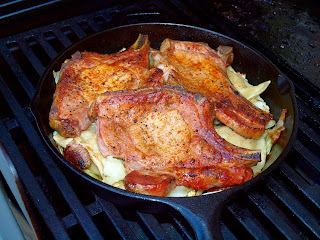 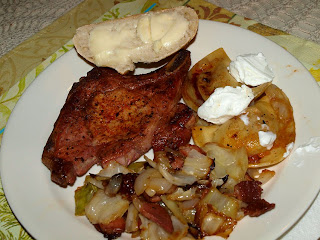