Last night’s supper was quick and easy. I love bologna sandwiches and cheeseburgers so why not put the two together? I had bought a frozen broccoli and cheddar bake that looked good, gluten free so that would be a quick side to have. I think the older I get the more I turn to frozen veggies and pasta dishes for sides; they do have some that are pretty good. My buns were onion poppy seed Ciabata.

My bologna was Bohrer and Moore old fashioned bung bologna sliced ¼ inch thick. I get it from my butcher Kah Meats. Bohrer and Moore was a meat packing company in Wapakoneta, Ohio that went out of business due to large packers. Not sure when they started, probably in the late 40’s. My uncle who was a butcher, and ran a grocery when I was growing up in the 50’s; got his hams from there. It was the best ham I ever ate. I think they were still in business when I moved here in 1973. When they went out of business the owner knew Dick Kah from Kah Meats loved his bologna so he gave him the recipe. I am sure glad he did; I have found no better bologna out there.

I made up the burgers with a press and made them thin. I had my Weber Spirit at 350-400 deg. with Grillen Grates. The burgers went on 4 minutes then flipped for 3 minutes, Swiss cheese added to melt and the buns to brown. I had cut the edges of the bologna to keep it from curling; it went on a little after the burgers. I had my side heating in the microwave.

It was a good sandwich, and one was enough to fill you up! I had some Vidalia onion and mustard on mine. My wife and I both liked it but think they are better when done alone. Bacon is still tops to add to a burger. I thought about it and had to try it! I liked the broccoli cheddar bake but the wife said it left her with an aftertaste. 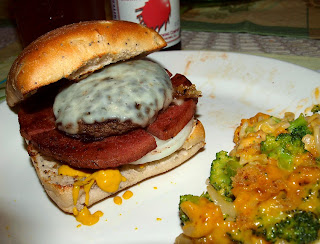 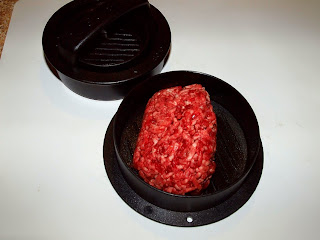 Ready for the grill 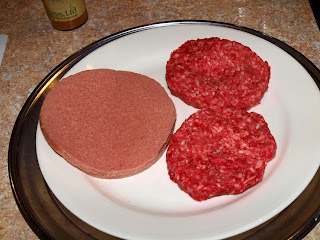 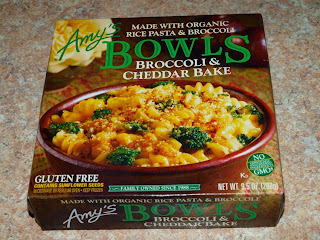 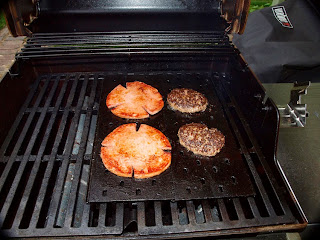 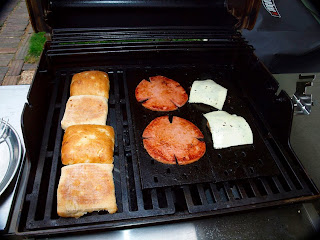 Sandwich with a good beer 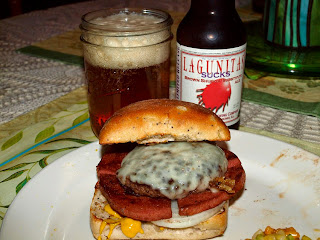 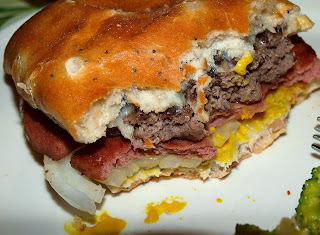