Old Dave’s post using his Weber Jumbo Joe made me break out mine today to do a chicken. It was a great day sunny and 86. I went this morning and bought 6 tomato plants and got those planted. I usually work up my little garden 4 X 8 feet but since I am a little hampered with the bad leg I did a no till planting.

The chicken I had bought yesterday; I spatchcocked it and got it in brine for 8 hours. Then it was rinsed and air dried in the fridge about 8 hours. I cut it in half and seasoned with a sprinkle of Cajun and a lot of Savor’s Mo Rockin chicken rub. I had my WJJ heated up to 300 deg. with some Stubbs briquettes. I easily maintained 300 to 325 deg. and it took a total of 1 ½ hours. I seared the chicken the last 10 minutes or so.

My side was spaghetti squash, I wanted a small one to serve each half but all they had was a large one. It was good so I was glad we had leftovers. I had looked at several recipes and came up with this one. I cut the squash in half and removed the seeds, a grapefruit spoon works well for this. I place cut side down in a dish with a ½ inch of water and nuked in the microwave until getting soft; 15 minutes. I used a fork to loosen the strands leaving in the shell and sprinkled on some Penzey’s sandwich sprinkle. Garlic salt would work too. I set them aside.

I sliced and quartered a small sweet onion; and sliced up six mini sweet peppers into rings. I sautéed them in a little olive oil just until soft and set aside to cool. I mixed in two large spoonfuls of sour cream and divided it on top of the squash. I cut some grape tomatoes in half, 4 for each squash half. I topped it with some shredded six cheese blend Italian. I sprinkled on some Italian blend seasoning. They went in my Traeger I had heated to 275 deg. which was about 295 grill level. It was in for 45 minutes.

The chicken was tender and juicy and I like the little heat the Cajun added to the Mo Rockin rub. We both loved the spaghetti squash. 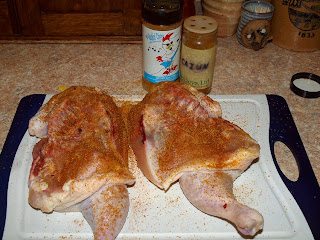 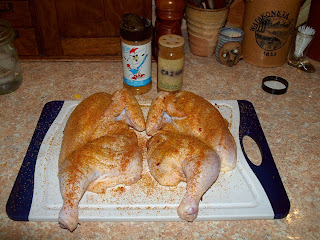 Getting the Weber Jumbo Joe lit 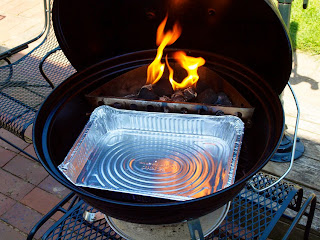 Sauteing the onions and peppers 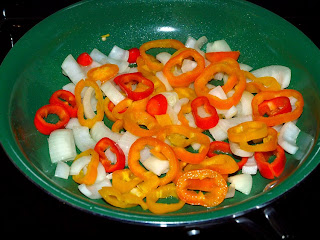 Squash cooked and loosened up 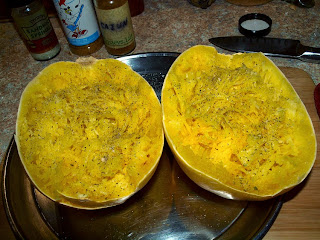 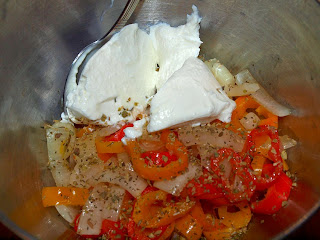 Adding to the squash 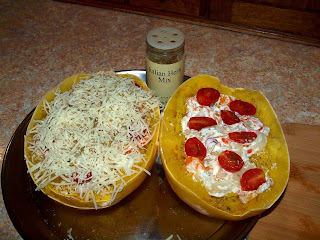 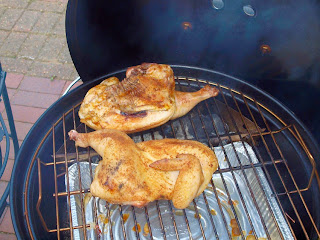 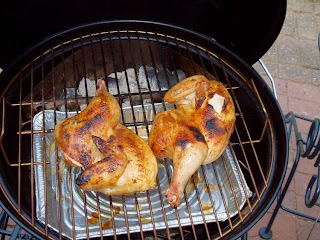 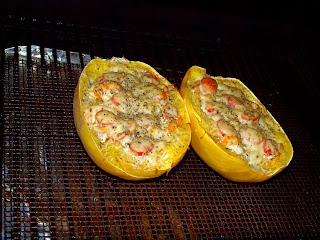 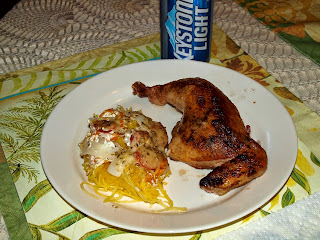