I had some leftover smoked chicken to use up. I planned on a lazy Sunday and a quick supper of quesadillas. I had planned on mushrooms, roasted red peppers from a jar and artichoke hearts besides cheese and chicken for the quesadillas. Then I thought melted onions and ended up making my melted onions and tomatoes for a topping. Some bacon would be good to crumble over the top too. I had four slices of good bacon; I like it done on the smoker so I did that and threw a couple slices of old fashioned bologna on for the cooks snack! I was busy most of the afternoon!

So my lazy day turned out to be busy. Being retired my days hardly ever end up as I plan at the top of the day. Most of the time it’s planning on doing two or three chores and lucky to get one done!

Our son had to work so our daughter in law dropped the grandson and dog off while she went to Lima shopping. The grandson did not want a quesadilla; he just ate some cold chicken. I fixed my wife and me a quesadilla.

The quesadillas were some of my wife’s veggie wraps, a layer of cheese, shredded chicken, sliced red peppers, sliced artichoke hearts, sautéed mushrooms and another layer of cheese; all on half of the wrap. I folded them over and then in a hot skillet with some olive oil spray to brown and melt the cheese two or three minutes per side.

I served them with my melted onions and tomatoes on top with some crumbled bacon over and a side of Cole slaw. We were done eating when the dil came and I fixed her one minus the bacon. Everyone thought they were pretty good.

Bacon and my snack 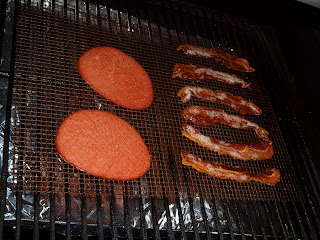 One Quesadilla ready to fold and fry 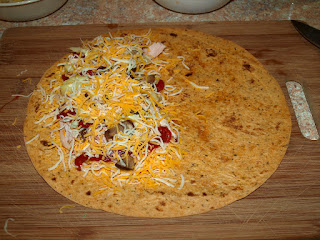 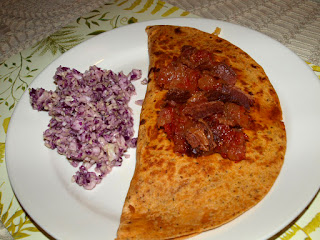