Today’s cook was simple and tasted good on a cool June day. I got 4 nice bone in country style ribs at my butcher, Kah Meats. I saw he had some fresh kraut brats too; so I got three of them to throw on with the ribs.

I wet down the ribs with a drizzle of red wine vinegar and seasoned with my favorite Penzey’s Galena Street rub. I let them set in the fridge a couple of hours before cooking. I made up two Vidalia onions; stuffed with beef bouillon granules and some of my gorgonzola and chive butter to do.

I put the ribs, onions and brats on smoke mode 175 deg. for 45 minutes. Another 15 minutes added the skillet of corn and edged up to 275 deg.; 300 deg. Grill level. In another 45 minutes the ribs were done at 160 deg. IT. I had brushed on some BBQ sauce one rib for my wife; I like mine bare sometimes.

It all tasted pretty good, the corn did not get as browned as when I do it on the stove and the onion could have had a longer cook time. The kraut brats were delicious and would make great sandwiches.

I drank a bottle of Yuengling Bock beer with the meal; some of the best bock I have had. 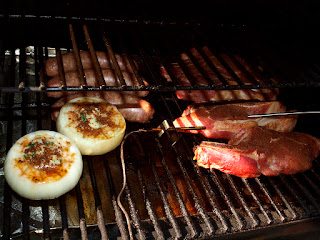 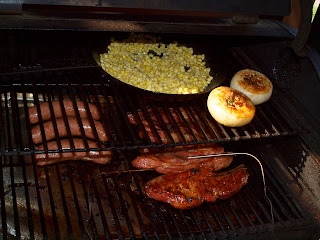 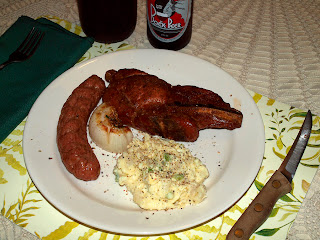