I had some Stub’s pork rub I wanted to try. It was the first rub I have bought lately that salt was not the dominate flavor. I found some BBRibs on special; I picked out a rack that was just over $7. They were all natural with no solution added.

I cut the rack in half to do one with sauce for my wife and one with just rub for myself. I wet them with some organic apple cider vinegar. I went light on the Stub’s rub on my wife’s half and heavy on my half.
I covered them with saran wrap and in the fridge a few hours before cooking.

I wanted to try Sparky’s, (a member of LTBBQ forum), cooking method. I used his method but added different ingredients when I wrapped them in foil.

My Traeger was acting a little erratic but I was able to pretty well hold the grill level temp at 275 deg. using smoke mode and P-0 and P-1.

I put the ribs on at 2:00 so should be done about 6:00. After 2 hours I added Kah’s BBQ sauce to my wife’s half and wrapped in foil. I just added some melted butter and a teaspoon of apple cider vinegar to mine. Both went back on meat side down for an hour. After the hour I unwrapped and back on meat side up and poured the juices over. I brushed on some more sauce on my wife’s.

At 5:30 I went to 300 deg. to finish up. They were done at 5:50. I tented them with foil to set while I toasted some bread under the broiler with my gorgonzola chive garlic butter. My wife and I are getting addicted to that stuff!

For sides I had potato salad and some of my secret beans, (Bush’s Grillen Smokehouse beans).

I plated 3 sauced ribs for my wife and grandson. I had the bare ones. My grandson finished his ribs and wanted more; so he had one of mine and said it was good too. I liked the Stub’s rub and the ribs were moist and easy pull off the bones.

Ribs seasoned and ready for the fridge After 2 hours, ready to wrap 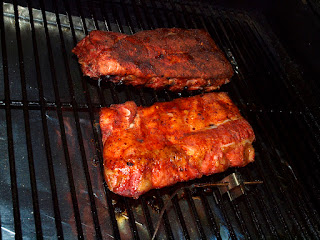 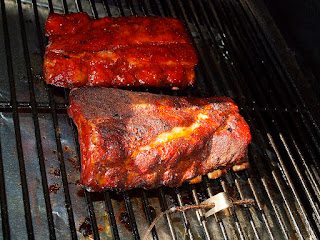 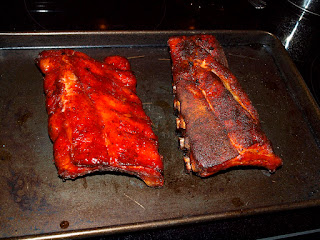 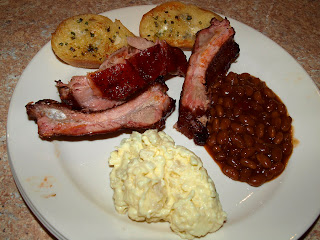 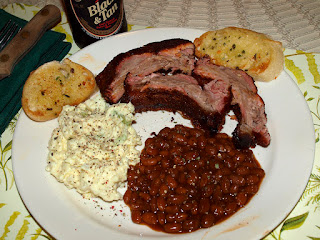