I had a flank steak and was hungry for some rouladen. Rouladen is a German dish made from beef round or flank steak pounded thin a thin coat of mustard then rolled with bacon, dill pickle and onions. I read where one woman said she did hers the day before she served it since it was always better the second day. This gave me an idea to do it over two days on my Traeger.

I made up the rolls Saturday. I cut the flank steak in half and pounded thin between plastic wrap. Next I put a thin coat of Lowensenf mustard on, salt and pepper; then two slices of my butchers beef smoked bacon, on the end I placed a Claussen dill pickle slice and some chopped onion then repeated. I rolled them and secured with toothpicks until I tied them. The grain was length wise on the roll so I was cross grain when I sliced them.

I heated up my Weber Q100 gas grill and my Treager on smoke mode. I seared them on the gas grill about 2 ½ minutes on each side. They then went on the smoker, on a grate over a pan where I added some beef broth and chopped onions. I did them on smoke 175 deg. for a half hour then went to 275 deg. grill temp until they were 145 deg. IT.

I tented them with foil and let them set about a half hour. I then placed them in a Pyrex dish added the pan juices and onions. After cooling they went in the fridge covered for overnight.

In Germany rouladen is usually served with spaetzel and potato dumplings or boiled potatoes and red cabbage. I was having egg noodles and when I have beef and gravy I want mashed potatoes topped with noodles and the gravy over.

Sunday I made gravy in my Lodge cast iron chicken friar with butter, and flour adding the pan juices and some more beef broth. I added the meat rolls after removing the string, cut side down. I had enough gravy to almost cover. I got them on the smoker at 3:00 and would slow cook at 250 deg. grill level temp for an hour without the lid then cover for two more hours.

At 4:00 I got my potatoes peeled, boiled and mashed with a lot of butter; I kept them warm on low heat. I did the noodles to get done with the meat. I had some good crusty bread with my gorgonzola chive butter I toasted under the broiler. The meat fell apart when I tried to slice it, very tender.

I served my wife and after I got my pics of my plate and ate a few bites I realized I forgot to top mine with gravy! I added some and this was delicious. This will be a great dish for next fall and winter.

I had a German Dortmunder style beer with the meal. 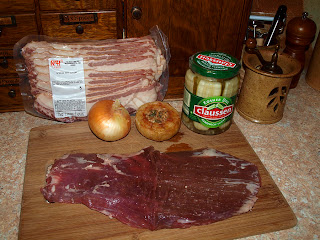 One ready to roll 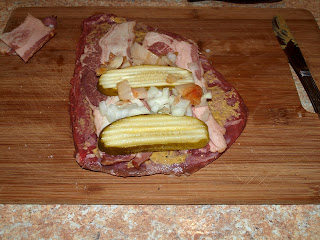 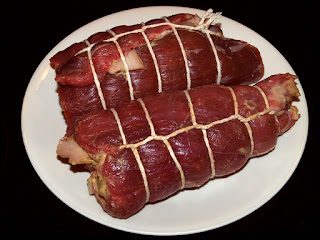 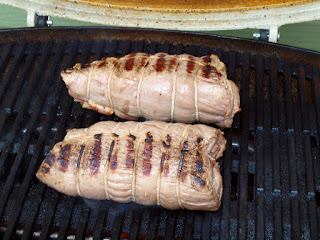 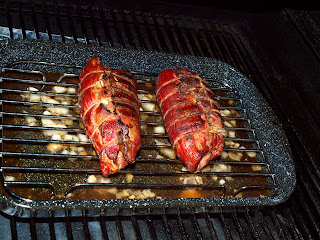 In the broth overnight 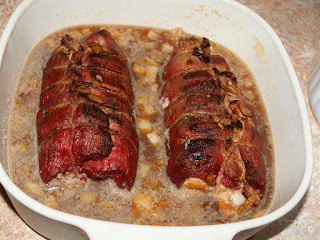 Gravy made and ready for the smoker 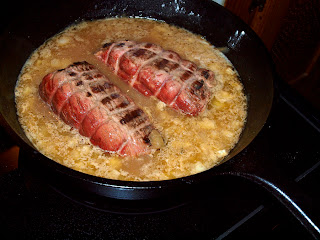 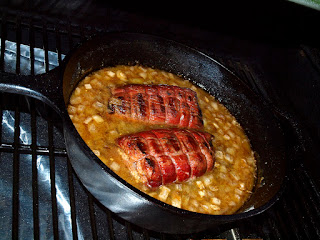 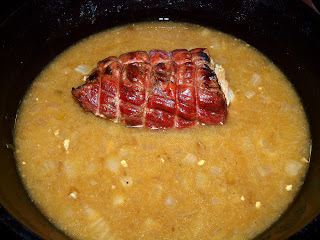 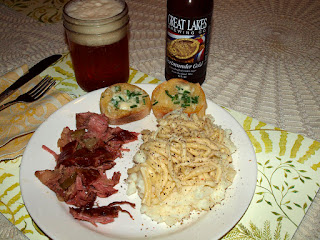 Update: Jun 10 2013
Here is a photo of my second meal and I remembered to add the gravy! You can also see how a slice looks since it was cold it sliced nice. 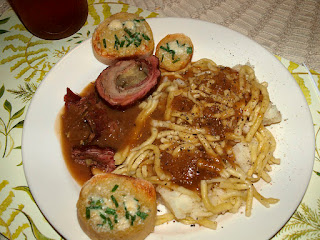