We were going to get carry ins tonight but decided to throw some lasagna together and do it on the smoker. I needed to mow grass but it was too wet; at least that was my excuse! I had two pieces of Texas garlic toast frozen to use and we would have a side salad.

I went to the grocery and got a pound of Bob Evans Italian sausage and other ingredients I needed.

I browned the sausage and threw in the chopped green pepper and onions, salt, pepper, a few shakes of red pepper flakes and some dried garlic flakes. I let it cool awhile.

I used a foil pan, a little sauce on the bottom, a layer of lasagna sheets, a layer of yellow squash, sausage mix over ¾ of it, half the sauce that was left and 1 cup of the shredded cheese.

I then repeated a layer using the zucchini. Over the last sauce layer I added salt, ground pepper and some Italian seasoning blend. I covered it with foil and in the fridge. I had an hour of relaxing beer time before cooking!

I had left the meat off of ¼ of it for our veggie daughter in law for leftovers.

I did it in my Traeger at 325 deg. grill level with the foil on for 45 minutes. I had some more beer time! I took the foil off after the 45 minutes, and added some extra mozzarella cheese. I added the sliced fresh basil the last 10 minutes. Total cook time was one hour 15 minutes.

My wife had the salads made and I covered it with foil while I toasted the Texas garlic bread in a hot skillet about 1 min. per side. We both loved it and I had seconds! For me it’s a keeper recipe. 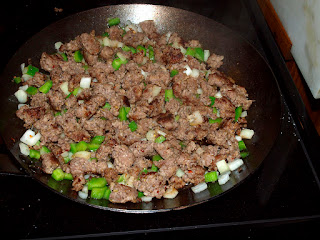 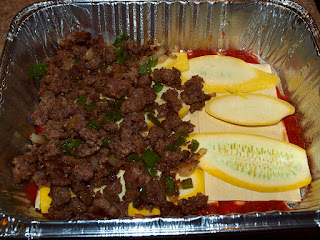 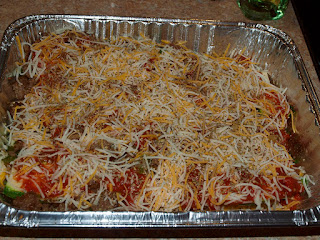 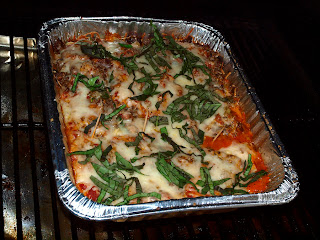 My Plate and salad 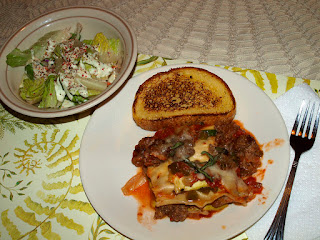