This morning I went to my butchers to get some ground lamb, I wanted to make a gyro meatloaf. I also got three nice thick pork chops for tonight’s supper. They were thick, some of the nicest chops I’ve had lately.

I wanted to stuff the chops with some cornbread stuffing. I was thinking chops just needed to brine about 2 to 4 hours but when I checked my chart it said 12 to 24 hours. I got a brine made from ½ gal. of water, ½ cup kosher salt, ½ cup brown sugar and a couple of smashed garlic cloves. Since I had just 4 hours I threw in a teaspoon of Morton’s tender quick thinking it might help. I cut the pockets in the chops to help with the short brine time.

I cooked a box of Betty Crocker’s old fashioned cornbread stuffing mix for my chops. I did up my gyro loaf using Alton Brown’s recipe. I used ½ lb. ground lamb & 1 ½ lbs. ground chuck & placed it in a saran wrap lined loaf pan & covered. I placed it in the fridge for overnight setting up & will smoke it tomorrow.

We usually have our favorite fried potatoes & applesauce with pork chops and I made some Pioneer Brand country gravy for over the chops. The chops were great, moist & tender and the gravy hit the spot. The short brine time worked, some of the best chops I have done in a while. I used my carbon steel skillet to fry the potatoes, no sticking at all. 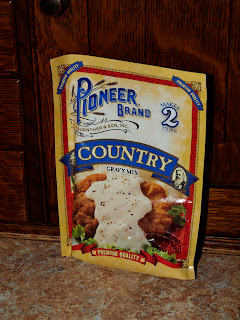 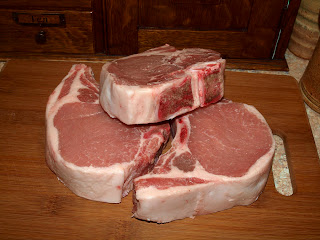 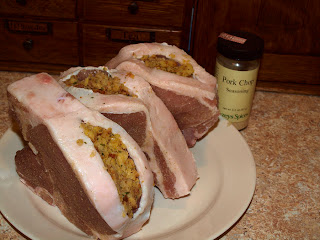 After 45 minutes on smoke 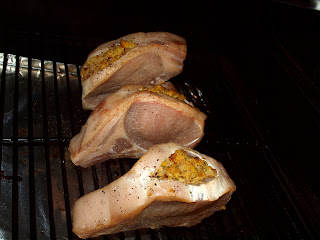 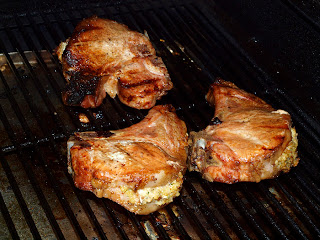 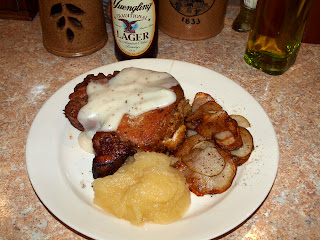 Smokin Don
Posted by Smokin Don at 1:00 AM