I first seen this cheesy jalapeno bread recipe at simplyrecipes.com by Elise, the photos will make you want this bread! When we were in Las Vegas I fixed this for my son & family. I found a large Italian boule to use. I didn’t use any jalapenos, just the cheese and it was a big hit.

I thought this would go good with my spare ribs, I found a small sour dough boule at Paneras. It would be perfect for the wife & I. It is simple to make, cut the bread most of the way through, both directions about 1 inch apart. Mix some shredded cheese with 2 or 3 TBS of melted butter. Spread the bread and stuff the cheese in all the openings. Wrap in foil & bake 15 min in a 350 deg oven, fold foil down & bake another 10 to 15 min. Dig in & enjoy. For this one I used about 1 ½ cups shredded Mexican blend cheese, 2 TBS melted butter & some parmesan cheese. I sprinkled some dried chives over the top before baking.

I was hungry for ribs & found a nice full rack of spare ribs at my butchers. I trimmed it up, my St. Louis style, wet down with some red wine vinegar, & my favorite Penzey’s Galena St. rub. I wrapped in plastic wrap & in the fridge about 4 hours before smoking.

Fried noodles would go well with the ribs. I found some Bechtle German style spaetzle at Meijers. I tried to make spaetzle once, poked holes in a tin pie pan to press it through. That was a disaster; I have tried different store bought spaetzle over the years but none to my liking until the Bechtle. I boiled it per package directions then melted 3 TBS of butter in a skilled, added some chopped onion & garlic then sautéed the noodles, adding salt & pepper and some dried parsley until I got some browning going on.

I got the ribs & trimmings on the smoker at 1:00 pm, did for one hour on smoke 175 deg then went to 225 deg for the rest of the cook. About 4:00 I mopped them with some Yuenglings Black & Tan beer. Normally I use some apple juice & Worcestershire sauce but didn’t have any apple juice. When you don’t have anything else beer usually works!
At 5:00 I mopped half with some Kah’s BBQ sauce on both sides. The ribs were done a little before 6:00.

At 5:15 I boiled the spaetzle & drained. At 5:30 I pulled the trimmings & munched on those while I fried the spaetzle & nuked a steamer bag of peas for our veggie. All served up, it was delicious. The sauced ribs were just right & the un sauced ones were fall apart, probably because they were on the hottest side of the smoker. The spaetzle was good with some crunchiness. The bread was almost to die for cheesy goodness. Thanks Elise for the idea & recipe! 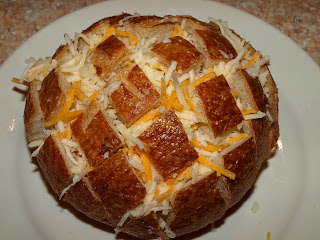 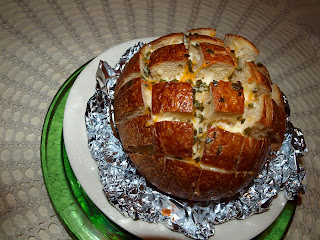 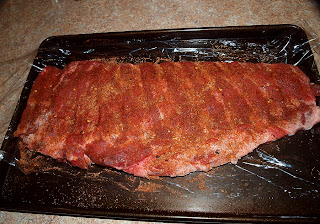 Ribs on the Traeger 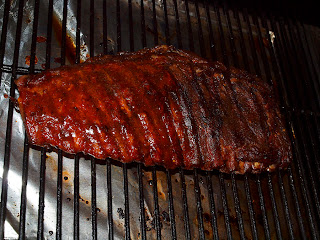 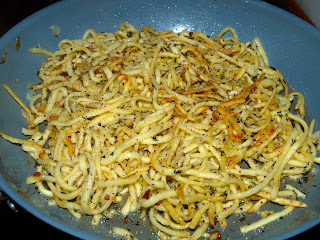 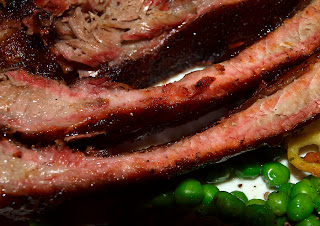 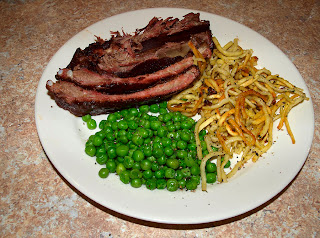