It was time to get my muffin pan out again for some chicken stacks. I used boneless skinless thighs & marinated in Lawry’s Teriyaki marinade. My stack would be a half of thigh, a slice of red pepper, a slice of onion and a slice of pineapple topped with another half of thigh all wrapped in a slice of bacon.

I had six thighs & after trimming and cutting in half I marinated about 3 hours. What I had extra I placed in another bag w/marinade & would do them up wrapped in two bacon slices.

My sides would be Uncle Ben’s whole grain medley, brown & wild rice and some baby bella mushrooms. I also had some parmesan garlic bread sticks I would throw on to heat up.

It was a nice sunny 80+ deg. Day. I just wanted to sit, sip a cold one & enjoy but had grass to mow first. I got that done in time for a little sitting before preparing supper. I made up the stacks an hour before cook time & in the fridge. Fired up the smoker & set at 225 deg. I did them for a half hour removed the stacks from the muffin pan and directly on the grate for the rest of the cook. Then I went to 300 deg. The muffin pan lets them simmer in the bacon grease & juices and set up some. They would be at 300 deg. for another half hour then 325 for another half hour; a total of 1 ½ hours.

While they were cooking I cleaned the mushrooms, melted some garlic butter & place some in each mushroom. I put the mushrooms on for the last 20 min. then brushed the bread sticks with some garlic butter & put them in the last 10 minutes. During that 10 min. I nuked my rice & heated some marinade to serve over the rice. I had saved the juice from the muffin pan & brushed over the chicken stacks at the one hour mark.

This is a pretty easy meal to make, and sure tastes good. I like using the packaged flavored rice mixes like Uncle Bens & Zatarains, they are quick and taste about as good as I can make from scratch. 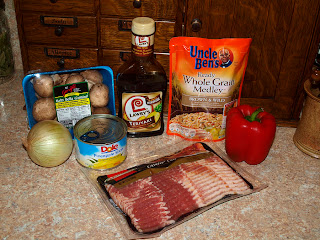 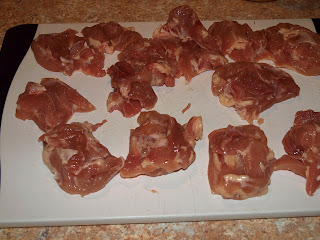 Making up the stacks 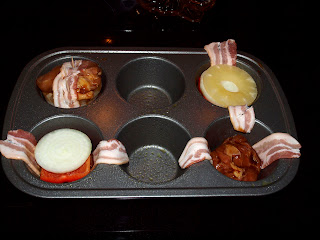 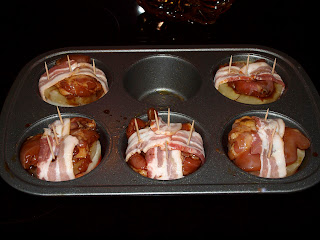 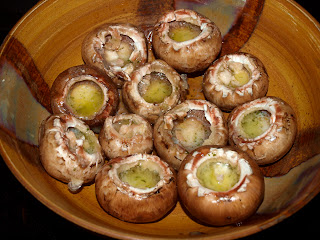 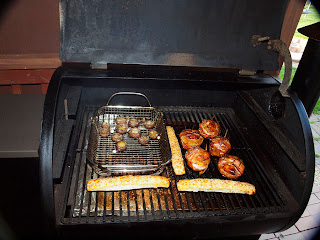 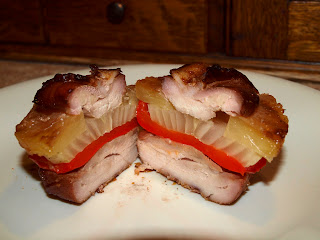 My Plate, I sprinkled some parmesan on the mushrooms 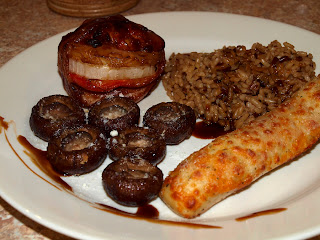 Smokin Don
Posted by Smokin Don at 3:27 AM