Last Saturday I was in a Meijers grocery store looking for tamarind paste. I had no luck on the tamarind but while looking at frozen pizzas I spotted some Tiseo’s frozen pizza dough so I bought a ball of it.

Sunday during getting my ribs ready; I sliced two pints of grape tomatoes in half, placed in a sauce pan with olive oil & salt. I simmered them on low, covered with parchment paper, for three hours. I added some granulated garlic & onion, a tsp. of sugar, and Italian herb blend, turned up the heat some & reduced for about 45 minutes. I then pureed with an immersion blender, this would be my pizza sauce. I also sliced up three onions & melted the same as the tomatoes for adding to my pizza.

I had planned on doing the pizza on the smoker but it was just 33 deg today so I opted (chickened) out of that & did in my inside oven. At lunch time I diced & fried up some bacon for the pizza. I watched a video on stretching out the dough on Tiseo’s web site. I had a blend of shredded cheddar & mozzarella and would also add some quartered artichoke hearts. For my half I also added some diced up marinated olives & peppers, and some fresh cracked pepper.

I removed the thawed dough from the fridge & let rest for 10 min at room temp. I preheated the oven to 475 deg. I proceeded to stretch the dough, following the video lesson. It went pretty good even for a novice, The dough worked nice, better that any other dough I have tried. I wanted a thin crust so pulled it as thin as I could. I was using a 13 inch perforated pizza pan & had about an inch of thicker extra dough. I cut it off & laid 4 strips of it on a pan, sprayed with olive oil & sprinkled with garlic salt. Folded the strips over & twisted for some garlic knots.

I first layered the sauce & some of the melted onions. Spread almost 2 cups of the cheese on then topped with the bacon & artichoke hearts. Sliced olives & peppers, and fresh ground pepper on my half.

I popped the pizza & garlic knots in the oven & set the timer for 12 minutes. The directions said to bake in a 400 to 500 deg oven for 12 to 15 minutes. After 2 minutes I turned on my convection fan. Checking at about 9 minutes the bread was about to burn & top of the pizza looked done. I pulled them out & let the pizza cool a couple of minutes before slicing.

The pizza tasted great, the crust was thin like we like it. The bottom could have been a little more brown but that was the cooks fault & when I get the temp & time down should be good. I will go down to 450 deg the next time & not use the fan. I like the Tiseo’s dough & will use it again. The extra worked out great for some garlic knots or twists. Next time I will have some garlic butter for dipping those! 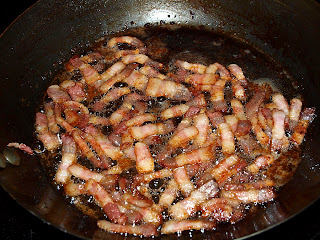 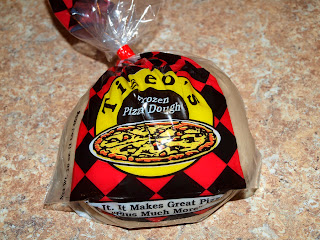 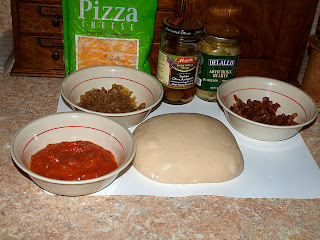 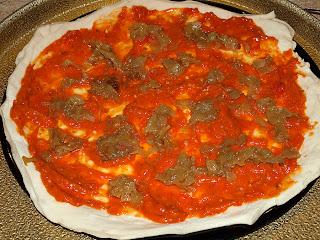 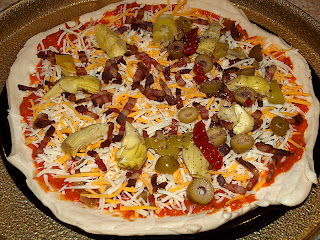 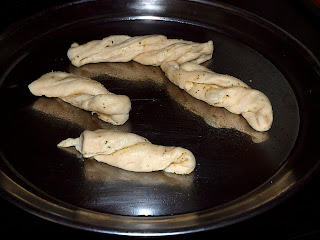 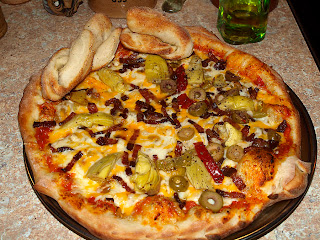 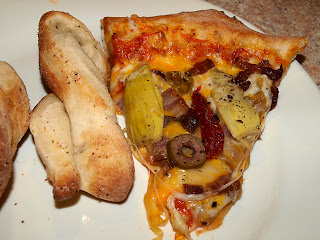