Twenty + years ago I was working second shift at the Ford Engine Plant, Lima Ohio. After getting off at mid-night some of us stopped in at the Corner Café for a few beers, ok sometimes more than a few! Nick the owner was a member of one of two Sicilian families in the restaurant business in Lima. He made the best Sicilian sausage sandwiches I ever ate. Sometimes I would get two to go, wake the wife when I got home & we would talk & eat our sandwiches. I have tried, over the years to duplicate them, but never quite making it.

Yesterday I tried again with a pound & a half of sausage. I would do these on my smoker. I had some leftover cornmeal mush and wanted to try some bacon wrapped artichoke hearts & hearts of palm. I did two artichokes & one heart of palm. With what was left from the cans I added black olives, sautéed some onion, green & red pepper and garlic in about 3 to 4 TBS olive oil. I let cool some then added that to the salad, 3 TBS of rice vinegar, a tsp. dried oregano, a tsp. dried parsley and some salt & pepper.

In the morning I mixed up my Sicilian sausage. Late afternoon I wrapped my artichoke hearts & hearts of palm and added some Lawry’s seasoned salt. Mixed up my salad & made 5 patties from the sausage. At 5:00 I put the mush and bacon wraps on. I did on smoke, 175 deg. for a half hour then went to 300 deg. & added the sausage patties. All was done at 6:30.
I had my sausage on a plain white bun & some mustard. I loved the bacon wrapped artichokes and the hearts of palm. My wife reluctantly tried an artichoke heart & thought it was good. I think they make a great orderve. Was my Sicilian sausage as good as Nick’s, not quite but close.

Peppers & onions for the salad 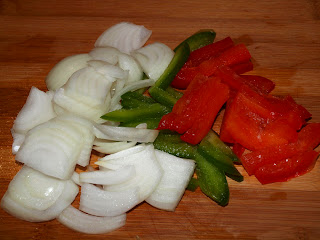 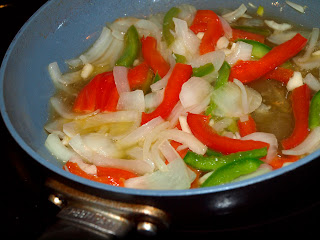 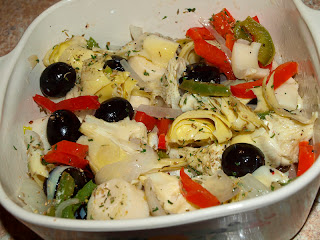 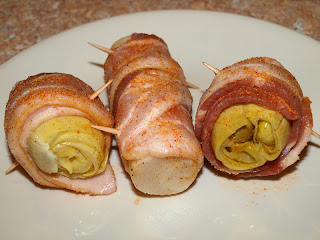 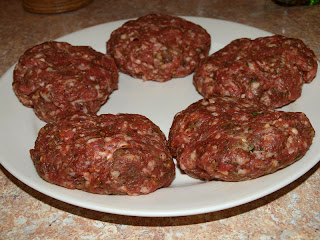 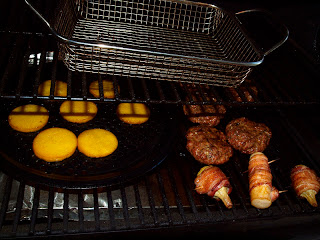 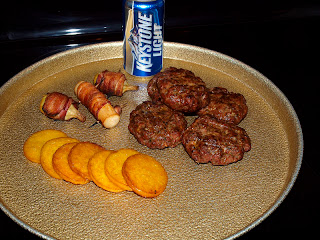 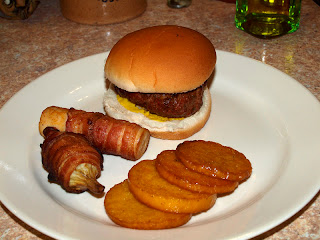 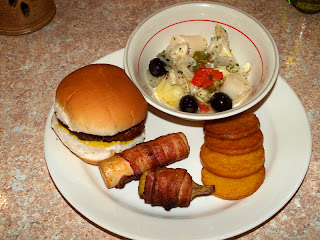 Smokin Don
Posted by Smokin Don at 3:55 AM