I have had a cold for a week now so I haven’t cooked much. I did do a pork sirloin roast that didn’t come out the way I wanted so I didn’t bother posting it. I wanted to try something different in my muffin pan so I thought this one up. I would layer chicken breasts, onions, & red peppers, on a slice of bacon for a chicken stack.

I bought a package of 3 skinless, boneless breast halves. I had planned to flatten the breasts & cut to get 12 slices for my 6 cup muffin pan. I had drilled 3 holes for drainage in each cup earlier to do chicken thighs. When I was ready to do the breasts they were like sized so just sliced each half length wise, about ½ inch thickness; then cut in half crosswise. This gave me the 12 slices I needed.

I marinated half in Lawry’s Mexican Chili Lime marinade, & the other half I drizzled with red wine vinegar & some Penzey’s Galena Street chicken rub. In the fridge for an hour before assembling the stacks. I suppose it’s a little silly to use skinless breasts then replace it with bacon! Well the bacon sure makes chicken taste better!!

I assembled the stacks about an hour before cook time, a slice of bacon, a chicken slice, a ¼ inch slice of onion, a slice of red bell pepper, another slice of chicken; then fold the bacon over & secure with a couple presoaked tooth picks. It’s best to do 3 at a time, I did 3 on one side with the marinade then the other 3 with the seasoning, so I could keep them separate. These went back in the fridge for another half hour, while I fired up my smoker.

I served my wife & I one each of the flavored stacks, & some rice with peas over top. We both thought the Penzey’s seasoned ones were best; the chili lime marinade didn’t add much taste. I think these would also be good with a BBQ sauce over top or some other good sauce. The onions I used were some sweet onions from Peru & they are about as good as Vidalia onions. 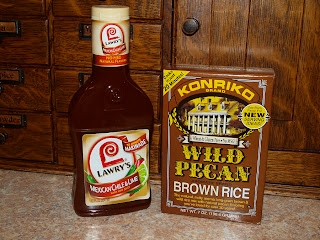 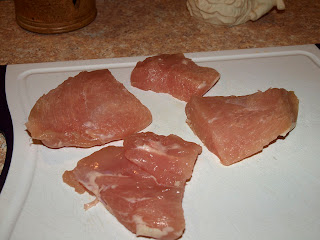 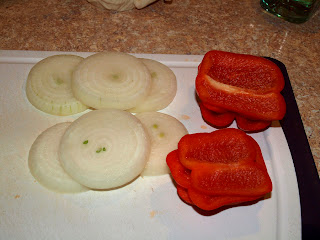 Making up the Stacks 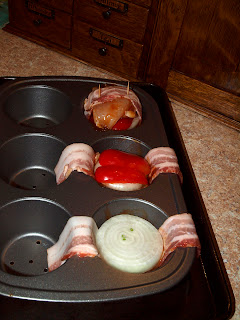 Ready for the Smoker 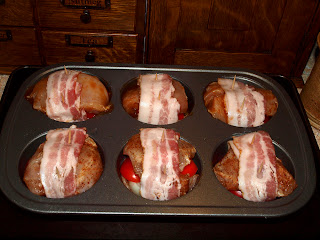 On the grill & Ready 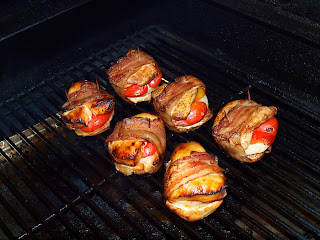 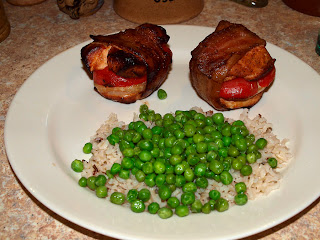