Yesterdays cook was pretty simple & easy. I was hungry for some of Kah Meats, my local butcher, fresh bratwurst. Saturday I picked up some Cajun brats for me & some cheddar cheese brats for my wife. There are plenty of varieties to choose from, the standard brat, cheddar brats, cheddar & jalapeno brats, tomato & garlic brats, green onion brats, Cajun brats, Firehouse brats, & probably a couple more I don’t remember. The Cajun brats are pretty hot but the firehouse brats are one notch up. My wife was baking her usual pumpkin breads for Christmas gifts to neighbors & friends. I was having leftover cheesy potatoes so didn’t need the kitchen for much. I got the brats on the smoker, smoke mode 175 deg. I would do them for an hour & a half then go to 225 deg to finish up. After an hour and 15 min. I put on a small foil pan with some peppers & onions, a little seasoning & olive oil. After 15 min. I poured on a little Yuengling,s brown & tan to braise the peppers & onions some. I then went to 225 deg., it ended up about 240 deg. but that was fine & the brats were done in another half hour. The peppers were still a little crisp & great for topping my brat. My wife had sauerkraut on hers. My wife had some corn & I had what was left of a can of Margaret Holms seasoned peas & peppers along with the cheesy potatoes. The peas are field peas & seasoned good enough to eat right from the can. The brats were great, natural casings that give a little pop when bitten into & juicy. I had my brat fix for awhile & leftover ones for lunches this week.-------------------------- 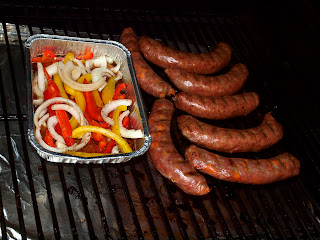 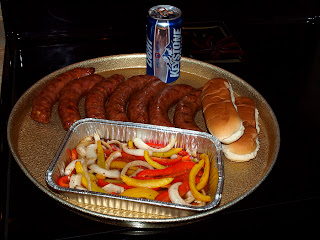 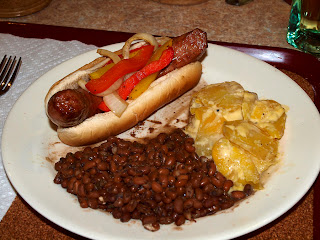