I have wanted to do something different on my smoker & found the perfect recipe to try at saveur.com. It was by Kathleen Squires, a free lance writer. She wrote a short article; Island Holiday: Christmas in Puerto Rico, and included 12 recipes for a Puerto Rican Christmas dinner.

I thought I could adapt her recipe for Pernil Asada to do on my Traeger smoker. It called for an eight pound pork shoulder picnic roast with skin on. I cannot get skin on at my butchers so went with a store bought one. It was nine & a quarter pounds & said 100 % natural; but then said 8% solution added. To me that is not all natural.

I washed it & then soaked in clean water for five hours in the fridge. I rinsed it & dried then in the fridge over a rack to air dry for five hours. Her recipe called for a marinade & do it in the fridge rotating every hour for six hours. I wanted to smoke mine for two hours so I mixed the dry ingredients along with a head of minced garlic and just used half the brown sugar; the other half I mixed with the wet ingredients.

After it had air dried I rubbed olive oil on the meat side & rubbed in 2/3 of the dry ingredients. I cut the 1 ½ X 1 inch deep slits in the skin side, poked in a head of garlic I had peeled & mashed then used the rest of the dry rub poking most into the slits. Wrapped it in foil & in the fridge to sit for six hours until cook time.

An hour ahead I injected some of the wet ingredients all over & let it sit. I got it on the smoker at 7:00 am & it is close to being done; 190 deg internal temp. After the two hours at 180 deg I placed it in a roaster pan. I had saved the rub & juice from its marinade & poured it over top and set the smoker to 300 deg. On my Traeger that would be about 325 deg grill level. After a half hour I started basting it with the wet ingredients every half hour until used up & then basted from the pan. Three hours into the cook I sliced the skin to try to get it crispier & render out some of the fat. When it hit 170 deg IT I quit basting it.
I pulled the roast when it hit 185 deg IT. I wasn’t watching close enough & the pan juices were burning from the sugar. I did add some water but was too late to save the pan juices. I had wanted to add some of it to the pork. The roast turned out fine. I cut all the skin off and trimmed the excess fat. It was tasty; melt in your mouth pork I sliced & cut the meat to use for fajitas & other dishes. I have the skin to crisp up for snacks and I had enough meat to fill the bowl in the photos and left enough meat on the bone for some good pork & beans later. I vacuum packed & froze it. Tomorrow nights supper will be fajitas & some kind of rice. I like this well enough to do again but won’t burn the pan juices next time.

A big thank you for sharing the recipe Kathleen!

A link to the recipe 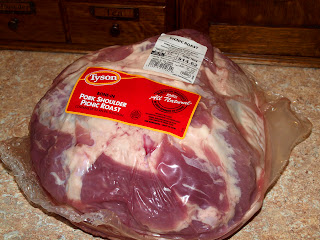 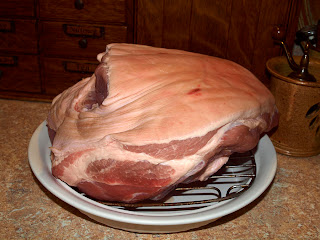 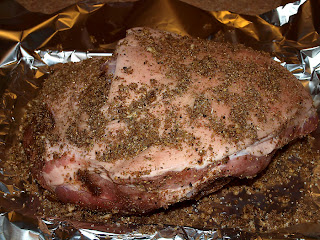 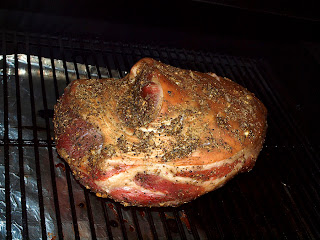 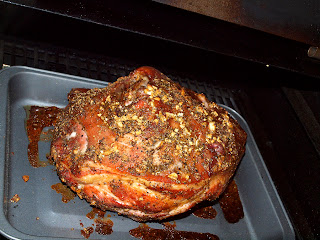 After slicing the skin 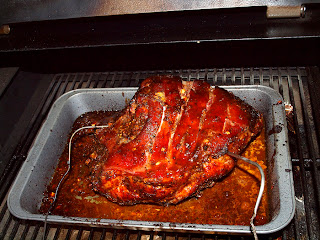 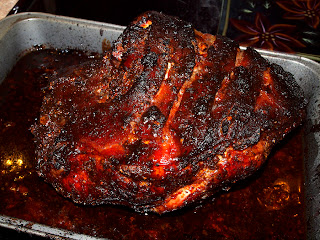 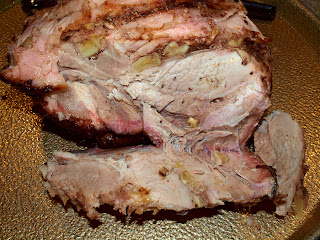 The finished product, fajitas to be. 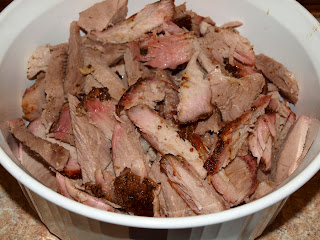