Thanksgiving is over, all our children made it home safe, it’s been rainy & cold, and I am kinda in the Holiday letdown mode! It was fun to cook for a large bunch once again. On Saturday I bought two organic chickens, two bunches of asparagus, & elbow pasta for Mac & cheese. I planned on spatchcocking the two chickens and doing them & the asparagus on my Traeger smoker. I would have it for a late lunch Sunday before our daughter headed back to St Charles, IL, and our son & family headed to Cincinnati to fly home to Las Vegas, Nev. Our son & family had already made plans to eat at their favorite pizza place & visit with friends. I told my wife & daughter they should go out to eat then I would not have to cook at all. I stayed home with the dog!

Monday I planned on doing the two chickens for our supper. I would have plenty of leftovers & could take some to my Mother. I always figure in some for Mom when I cook, she is 90 years young today, Nov. 29th!

Sunday evening I spatchcocked the two chickens, I cut 3 slices a little into the meat, in each breast half, two in the thighs, & one in the legs. I placed them in a large Dutch oven dish, poured the marinade over & in the fridge overnight. My thinking here was it would let the marinade impart more flavor, more of the fat would render out while cooking & help crisp up the skin.

Monday I got my Mac & cheese ready to put in the oven. I had just bought a cast iron smoke box, some lump charcoal, and some apple wood chips. I wanted to try this & see if I could get more smoke & the apple wood flavor in the chicken. I loaded the box with some of the lump charcoal & apple wood; lit the charcoal with a propane torch & then I fired up my Traeger & it settled into 180 deg. I took each chicken out of the marinade just letting drip some then on a tray & sprinkled with some Penzey’s chicken & rib rub. I placed them in the smoker. I left them on smoke for one hour then turned it up to 375 deg until I the IT of the legs & thighs were at 185 deg, this took another hour. My Mac & cheese was in the oven for 45 min. & I had some Allen’s seasoned cabbage heated up.

The chicken was great, moist, & skin was crispy, even though a little too brown. Next time will stick with my usual 325 deg until about 165 to 170 IT & then go to 375 deg to finish. My Mac & cheese was good & the cabbage was good. I had completely forgotten about the asparagus I had & would have been a little better than the cabbage! The forgetting comes with my age!

My trial with the smoke box didn’t work too well, only about half the wood burned, as you can see in the photo. I need to get the charcoal burning hotter and placing on top of the heat shield instead of the grate may work better in my Traeger. The ignition temp of most wood is around 340 deg.

For our supper last night my wife had the breast & I had a leg & thigh. I have one & a half chicken leftover. A half chicken will be for my Mom & I will make creamed chicken from the other. For tonight’s supper we will have the creamed chicken over Texas garlic toast, the leftover Mac & cheese, and some of the forgotten asparagus! 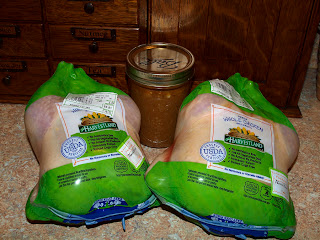 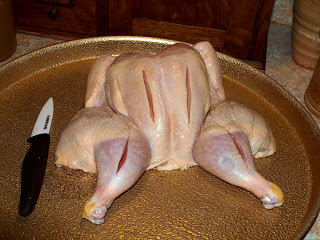 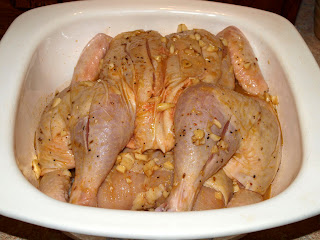 Seasoned & ready for the smoker 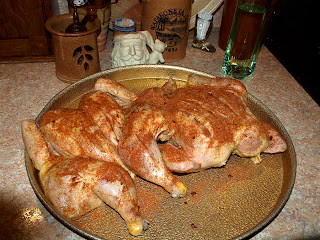 After 1 hour on smoke 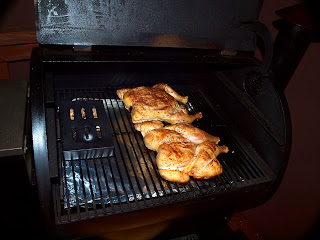 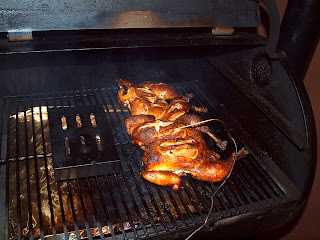 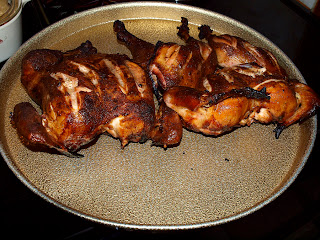 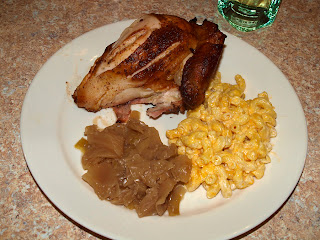 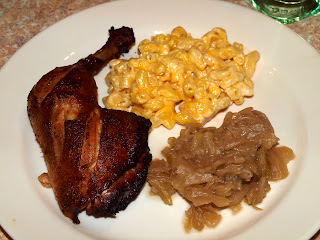