I had cooked the Pernil Asada mainly for fajitas so last nights supper was pork & shrimp fajitas. I planned to have rice with them. I used to do my own rice dishes but getting lazy in my old age. More often now I use Zatarains or Uncle Bens preseasoned rice. It is just about as good as I can make & much easier. My wife chose Zatarains yellow rice to have.

I had a package of McCormicks premeasured seasonings all in one pack for garlic lime fajitas. There is enough to do about 2 lbs of chicken, pork, or beef for fajitas. I got the pork, enough for 4 fajitas, ready about 2 hours before cooking. Drizzled on a little olive oil & some of the seasoning I had mixed together; then back in the fridge. I cleaned my shrimp, deveined & shelled, a little olive oil & seasoning on them an hour ahead.

I washed a yellow & a green bell pepper, Sliced thin half of each one & about ¾ of a med. sweet onion. I got my rice on & heated a large skillet on med high, a little olive oil, & dumped in the onions & peppers; cooked them a few minutes. Then I added the pork. Cooked & stirred a few minutes. It looked like it could use a little tomato sauce so I squirted on some ketchup, about 3 TBS. Tomato sauce probably would have been better but this was quick. I stirred that up then added the shrimp & stirred that awhile. When the shrimp were done I poured in some beer to deglaze & steam.

The rice was done & I heated up 4 flour tortillas in the microwave. We assembled our fajitas, some of the pork & shrimp, a little fresh salsa, and sour cream. They were delicious, among the best fajitas I have made.

Tonight we are having pork sandwiches from the Pernil Asada, and left over rice. I will get some no knead bread started tonight to have with my New Years Day meal, pork & sauerkraut. Tomorrow night we are going out for a New Years eve buffet. A restaurant here, Marley’s Downtown is taking reservations all evening at different times, the late ones can stay for entertainment & to ring in the New Year. We have 6:00 PM reservations, and I will probably be in bed to ring in the New Year! My wife will be up watching TV, the ball coming down in Times Square. 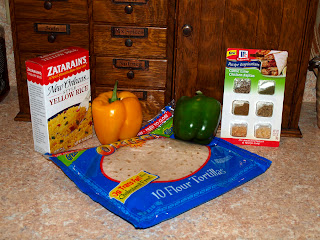 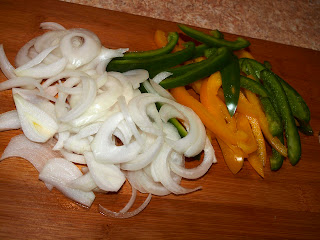 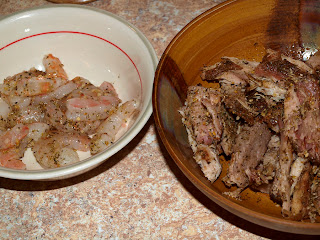 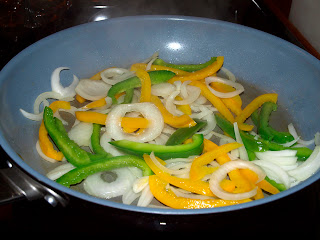 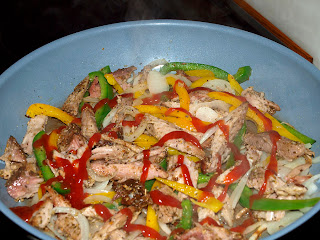 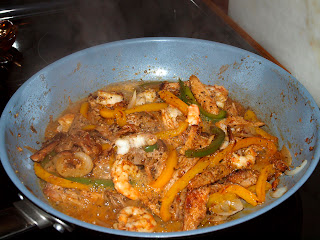 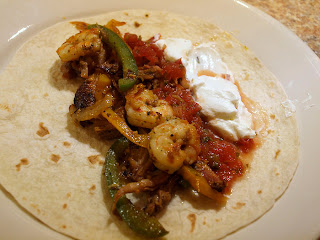 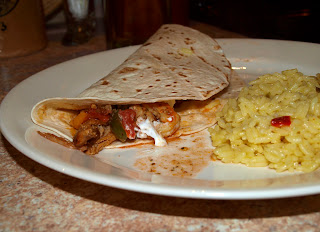