I don’t remember exactly when I discovered no knead bread on the internet, about a year ago. The first loaf turned out fantastic, I did it in a large Pyrex baking dish with a lid. After I got my Lodge 5 quart cast iron Dutch oven I used it & that’s what I prefer to bake in now. Then I discovered if I lined it with parchment paper it didn’t need cleaning afterwards. Sometimes the folds will affect the edge shape of the loaf but doesn’t hurt it and the paper makes good handles for removing the bread from the pot. You don’t need corn meal but if you like it on the bottom of the crust, sprinkle some in there.

There are many recipes posted on the net but most are fairly close. I have settled on one that uses 2 ½ cups of flour. The first loaf I baked, after the first rise the recipe said place on a floured cloth to fold & get ready for the second rise. It is very sticky compared to normal bread dough and stuck to the cloth after the second rise. Then I started using a plastic cutting sheet & that worked better. I still found trying to do the fold & shaping with my hands was a chore to keep my fingers from sticking to it.

I then came up with this method. I mix the dough in one bowl for the first rise. I have a second bowl a Pyrex about the same size as my Dutch oven; I spray it with some olive oil then use a plastic spatula to dump the dough into it. I sprinkle on some flour and do two or three folds with my spatula, then let it rest for 15 minutes, and shape it using the spatula. Cover it with a damp towel for a second two hour rise.

I cut a piece of parchment paper to fit the Dutch oven. Preheat it in a 450 deg oven, without the parchment paper, for one half hour. Then poke the paper into the pot using the spatula, and just plop the dough into it. It doesn’t matter how it falls, it will do fine.
So now my hands never touch the dough from the start to the finish.

This loaf I used 1 1/8 cups of water. It came out a little on the flat side but was delicious. I may just try 1 cup of water on the next to see if it raises more.

I used a bread maker for awhile & it did pretty well for bread but I was never able to get the good texture and crispy crusts I love with the no knead bread.

Mixed & Ready for the First Rise 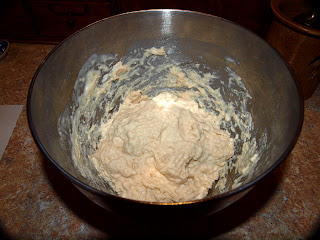 This is what it should look like after the first rise.
This was after 16 hours. 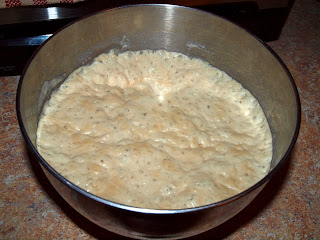 In the second bowl, flour sprinkled over, & folded 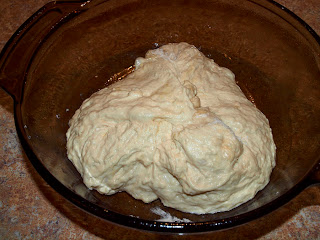 Shaped and the spatula I use. 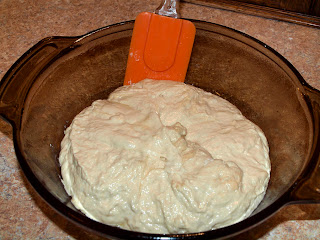 After the second rise. 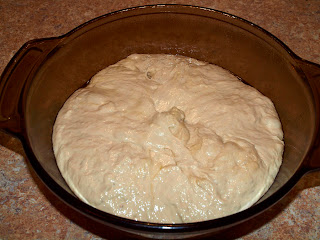 In the Dutch oven & ready to bake. 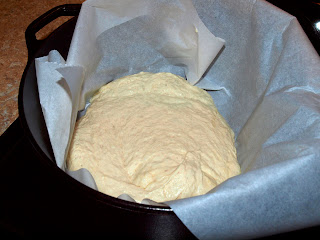 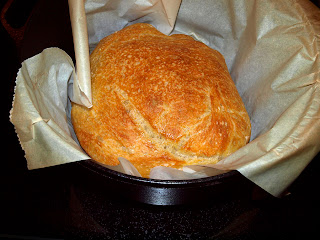 Cooling on a trivet. 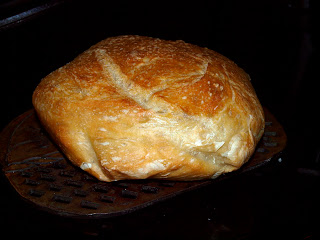 A look at the inside, sliced. 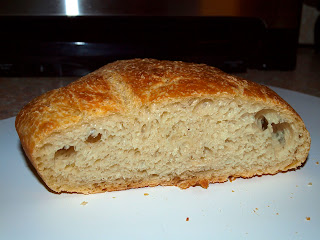