Chicken & Noodle soup always taste good but especially in the fall or winter. I have made this enough I don’t use a recipe but basically it’s about the same every time. Homemade noodles are probably the best to use but found I don’t do noodles well! I used to use Reams noodles & their flat dumplings; you can find them in the frozen food section. They are the best store bought noodles I have found.

A few years back I found some noodles at a local bakery, Butler’s, in Van Wert, Ohio. They were as good as any homemade I have eaten. I started using them & then found that Waltz Meats bought his noodles from Butler’s & sells them along with his canned chicken & beef. If you are not local you won’t be able to find these, so just use a good noodle product or make your own.

The next thing you need is some good chicken, I spatchcocked one & did on my smoker at 325 deg until an IT of 180 deg, pulled & let cool. If I am making a small batch, 8 oz. of noodles, I use half the chicken for a large batch, 16 oz. of noodles I add the breast meat from the other half. For this chicken I rubbed some seasoned butter, Lawry’s seasoned salt no MSG, under the breast skin & brushed on the chicken. I basted it once during the cook. It took about an hour & a half. A rotisserie chicken would work too or bake one in the oven. I have also made some that was tasty with canned chicken.

I made my own broth for this batch, 2 to 3 quarts of water, 2 or 3 stalks celery, one med. onion, a handful of baby carrots, a bay leaf, 1 Tbs. kosher salt, 1 Tbs. poultry seasoning, and a few turns of the pepper mill. I had some chicken backs & giblets frozen I added, brought to a boil then simmered a couple of hours. I skimmed off some of the fat, removed the chicken & veggies then strained the broth & left on low until I was ready to finish the soup. Don’t skim off all the fat, my cousins Dad said soup is no good unless it has eyes, a little fat, on top. If you don’t make your own stock use at least one quart of chicken broth & water as needed.

When my chicken was done I let cool & returned the broth to a boil & added 8 oz. of noodles. I also added a handful of sliced carrots and a Tbs. of mustard. I lowered it to a slow boil & let the noodles cook about an hour before adding the chicken. You could add some chopped fresh parsley or a Tbs. of dried at the end. It adds some flavor & color. Add more water if needed at this time. Let simmer awhile before serving along with some crackers, I like butter on mine, or some good crusty bread & butter. Enjoy! 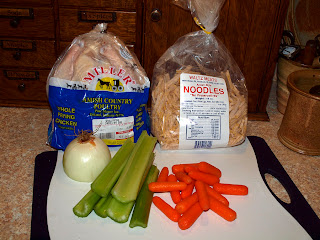 Chicken ready for the Smoker 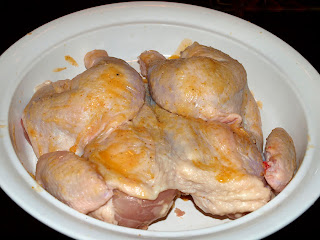 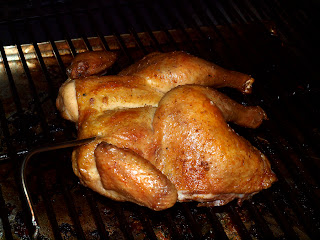 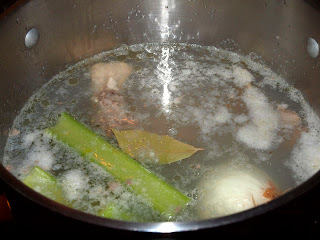 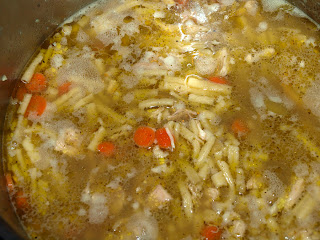 My Bowl w/my no knead bread 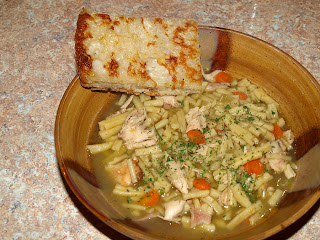