I love Crockpots, & have had one since they first came out in 1971. I especially like to do pot roasts in one. Early in the day you can throw in a beef chuck roast, potatoes, carrots, onions, water or broth, seasoning and forget about it till dinner, supper to me, time.

Since I got my Traeger pellet smoker I do most of my cooking on it. Besides smoking meats I do a lot of other cooking on it too. I never did like getting into a rut & having the same thing week after week, I am always trying new things. I used to have plenty of cook books but after the internet came out I get most of my recipes from there. I get a lot of my ideas from pelletheads.com. a forum for pellet smokers, all brands. Then there is always food network where you can get a ton of recipes. I have favorite food bloggers I follow and I like savuer.com, they scour the net for some of the best recipes.

This recipe was inspired by Emeril, smothered pork chops with apples, cabbage, & potatoes. His was done in a dutch oven on top of the stove, slow like Crockpot cooking. I would smoke some chops first then add to a Lodge cast iron chicken fryer, with cabbage, onions, & potatoes a lid & finish in my Traeger slowly. Ergo my Traeger Crockpot.

I bought 4 boneless chops, I would rather use bone in but these would fit in one layer nicely in my pot. My idea here was to layer them on top & the beer & cabbage moisture would steam them.

I put them on my Traeger at 175 deg for one & half hours. While they were smoking away I diced up 3 slices of bacon & browned in my fryer along with a tablespoon of bacon grease, added a can of Allens new potatoes & browned them some. I then added a med. chopped onion & cooked a couple of minutes, then a little salt & pepper and enough chopped cabbage to fill the fryer. While I was doing this I remembered I had forgotten to add a chunk of ring bologna to the smoker. I was going to do this for some snacks the next few days. I quickly cut some slices in the top & threw it on the smoker. I cooked the cabbage a few minutes stirring to get it coated with the bacon grease.

I took my Crockpot to the smoker added the chops & poured about a half bottle of Yuenglings Lager beer over all, covered with a lid. I turned the smoker to 225 deg & cooked for two hours. This last step could be done inside, stove top or oven, but it was more fun to do on the smoker. The bologna was done after an hour at 225 deg, it had been on smoke for 45 min. Turned out great.

I took the Crockpot inside & let set with lid on while I toasted some garlic bread under the broiler. I used some hot dog buns I didn’t want to go to waste. The wife & I both liked my supper. The chops were fork tender & the hot dog bun garlic bread was pretty good too. 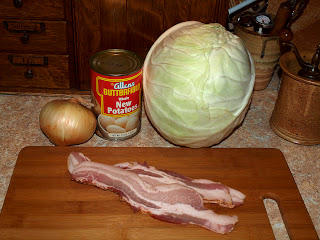 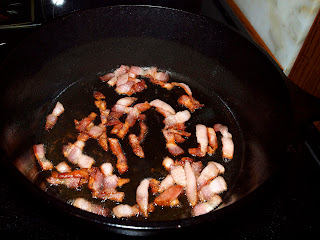 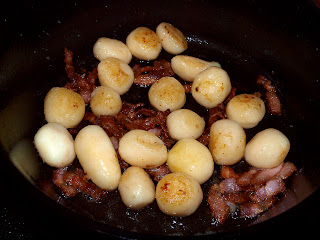 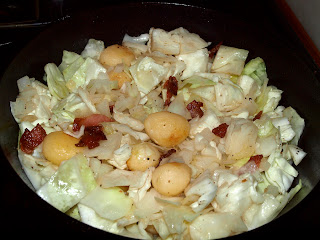 All on the Smoker 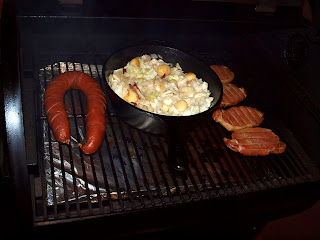 Chops Added to the Pot 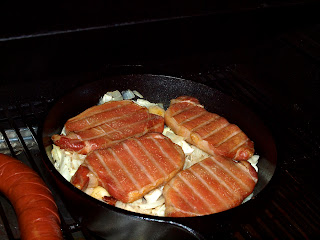 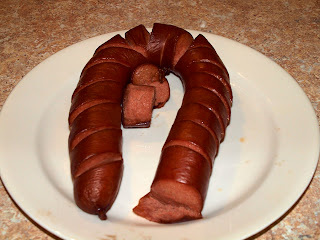 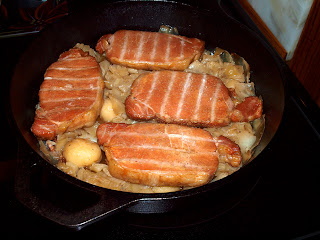 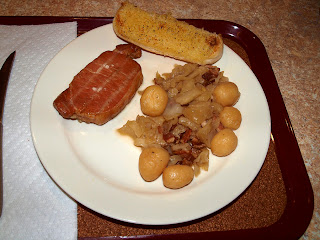 Smokin Don
Posted by Smokin Don at 3:42 AM