Fatty made with Fatty Piston Stuffer

One more great idea from Jeanie, at Cowgirl’s Country Life blog. A piston stuffer to keep the stuffing for a fatty in a nice shape. She said she got the idea from a guy called Grillinski. Making the stuffer was easy. I bought the supplies at Lowes; a 2 foot section of 2” PVC pipe, a section of 1” pipe, had to get a 10 ft section, two 1 ¼ “ end caps and some PVC glue. Total cost was about $12. There is enough pipe left to do a second one. I cut 9” off the 2” pipe for the cylinder and 11” from the 1” pipe for the plunger. I cut ½ inch of one end cap for the plunger & the other cap would be the handle. I sanded & smoothed all the edges. The end of the plunger needs to be square so the end caps stay straight when you glue them on. If they’re not square use a file to square them up. I used a scotch pad to remove ink writing & bar codes from the pipe, glued the end caps on & it was done. Well all but washing good in soap & water before using.
The stuffing mix is endless, whatever you can think up. For my first one I decided to do a breakfast fatty. I bought some Ore Ida O’Brian style potatoes to use for the stuffing. I could have fried my own with onions & peppers but this would be easier.
I measured out 4 cups of the Ore Ida potatoes, fried them in a couple TBS of olive oil & added some garlic flakes, salt, & pepper. I did them on med low heat w/lid until potatoes were cooked through, removed the lid, added the seasoning, & turned the heat to med & browned them up, scrapping the good brown bits from the pan. I let them cool then added some shredded cheddar, stirred & ready to add to the stuffer. I sprayed the inside of the cylinder with some olive oil, this might not be necessary but I want them to come out easily. I sat the cylinder on saran wrap long enough to cover both ends. Filled it tamping some until ½ inch from the top; wrapped it in the saran wrap & in the fridge until tomorrow. Tomorrow I will roll out my sausage in a plastic bag, add the stuffing, roll it up then wrap in a basket weave of bacon. Some people will say Oh My all that fat, well if you think of it as, a slice of the fatty would be like having a couple slices of bacon, a sausage patty, and home fries, it doesn’t sound that bad. Also this is for a treat, you’re not going to have this every morning for breakfast!
It won’t be long until time to fix my supper, pork chops are in a marinade, & I will smoke them along with a sweet potato & grilled peaches.
Check back later to see how my fatty turns out. 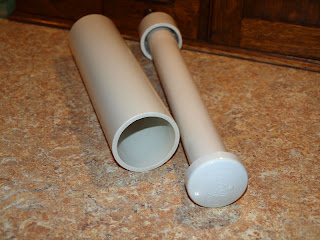 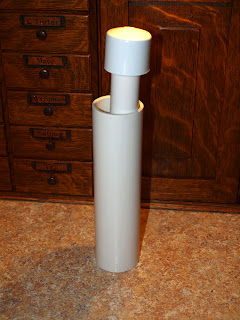 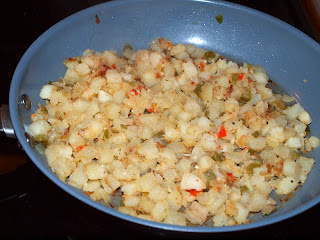 Get all the brown goodies 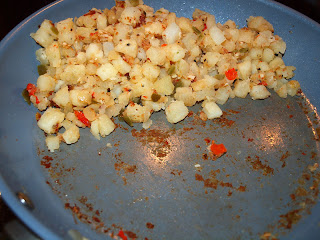 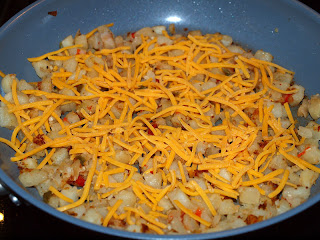 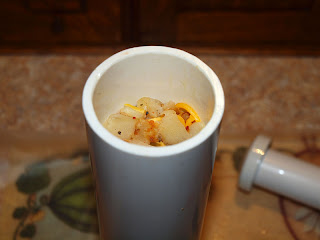 Well my stuffing had set in the stuffing cylinder, in the fridge overnight. This morning I was ready to make the fatty. I place the sausage, just over one lb., in a Ziploc bag; worked it flat with my hands. Then I used a rolling pin to get it into the corners and a even thickness as I could. I cut the top off the bag & used the plunger to push the stuffing mix onto the sausage. I used the bottom of the plastic bag to help wrap the sausage over the stuffing, then back in the fridge to set awhile. I made my bacon basket weave using 12 slices, on parchment paper. When I went to place the fatty on the bacon discovered it was too long, or I should have used more bacon slices, to do an angled wrap & get a herringbone look like Cowgirl did. I decided to go with a straight wrap. I had to use toothpicks to hold in place but the top would look nice.
I fired up my Traeger on smoke P-0 & settled down to 190 deg, the ambient temp was 48 deg. I decided to leave on smoke for ½ hour then go to 300 deg. I placed the fatty on my porcelain pizza pan with the bottom up, where all the toothpicks were. After smoking for ½ hr I went to 300 deg and inserted my temp probe. After another 45 min. it was up to 130 deg IT, checked & the bacon was browned up some. I wanted to flip it & go to 375 deg to brown up the bacon & an IT of 160 deg. When it hit 160 deg the bacon looked as if it could be a little browner so I let it go to 165 deg then pulled it. I let it cool then in the fridge until tomorrow for our lunch. I will slice it, brown it some, an egg, & hollandaise sauce on top.

Pressed out by hand 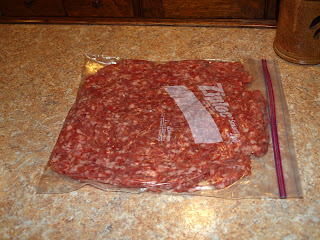 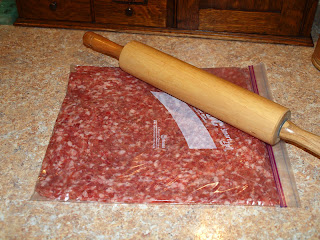 Stuffing extruded onto the sausage 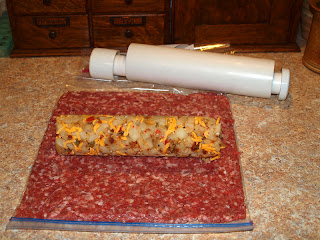 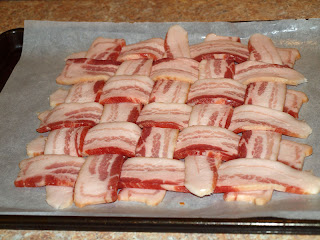 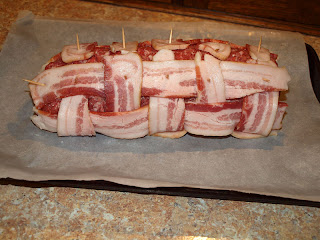 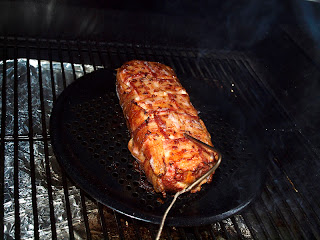 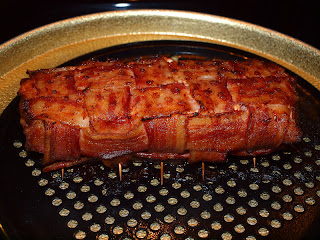