I ask my wife if she wanted BBQ chicken today, we were both getting a little tired of pork & beef. I remembered some BBQ chicken from years ago. I took my son, when he was about 8 or 9 to a primitive black powder meat in Southern Indiana & we camped overnight. That was about 30 years ago! A guy there was selling BBQ chicken halves; he had two pots set up on gas burners. One pot was boiling water & one was BBQ sauce. He was continually adding & changing the chicken. It was delicious, fall off the bone, & some good sauce.

I wanted to duplicate this on my pellet grill, I knew it would not be the same but wanted to come close. I had some Red Pig Inn BBQ sauce I wanted to try, a 16 oz. bottle. The Red Pig Inn is a BBQ place in Ottawa, Ohio & has been in business 33 years, winning many awards, for their ribs, in NW Ohio BBQ events. The last time I ate there was at least 15 years ago. I opened the sauce & tasted, heavy on vinegar, probably close to a Western N. Carolina sauce. I let the wife taste it & we decided I would add some brown sugar.

I had a split fryer to use. A cut up one was $3 more & I can cut it up for $3. I knew my 9 inch skillet was too small so I got my 12 inch from the shed, it looked too big & shallow. So off to WalMart to see if they had a chicken fryer, they carry Lodge Cast Iron Ware. They had one, 10 ¼ inches, with a lid so that was perfect. I had been wanting one anyway, & this was an early Christmas present. I would initiate it with my BBQ chicken.

I skinned the chicken, to cut down on the fat, rinsed & dried. In a dish, added salt & pepper drizzled olive oil over, some chopped garlic and mixed to coat well. I placed it on the grill, smoke mode at 180 deg. for a half hour. Upped the temp to 350 deg for another half hour & turned the chicken after 15 min. I preheated the chicken fryer, sprayed on a little olive oil then added the chicken. I put about 2 Tbs of brown sugar over the chicken, poured in a half can of beer, then enough BBQ sauce to just about cover. Dark beer would have been better but all I had on hand was my faithful Keystone so the had to do.I placed the lid on, back on the smoker, & turned the smoker back to 250 deg I left it there with lid on for two hours then removed the lid for another ½ hour. Total cook time 3 ½ hours.

I was going to serve the chicken over some cheesy corn meal mush and I had a bag of frozen peas in a steamer bag for on the side. I brought the chicken in & on a med low burner while I made the mush & steamed the peas. For the mush I followed the directions on the box, Quaker brand, & it thickened up faster than I thought it would. I added a little heavy cream, a cup of shredded sharp cheddar & stirred to melt & blend. I served it up with some bread & butter. Very tasty & made a pretty serving. This is a recipe I will use again & I did like the BBQ sauce too. 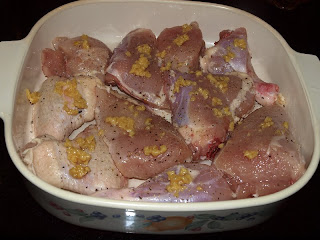 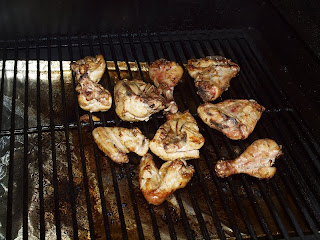 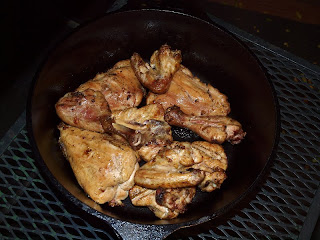 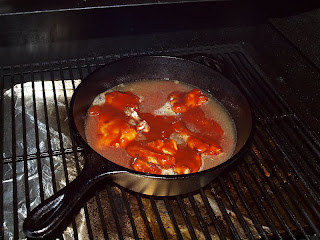 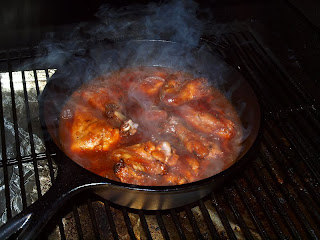 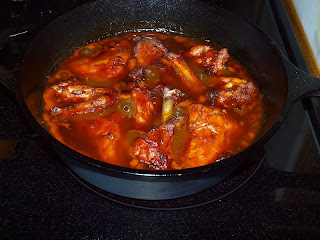 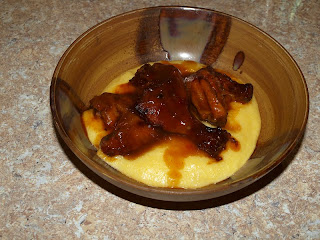 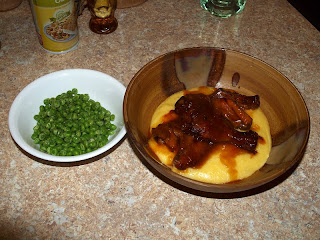 Smokin Don
Posted by Smokin Don at 2:01 AM