Today was another nice day to be outdoors, sunny & I think it was about 65. I had found a recipe for spicy candied pecans, on saveur.com, I wanted to try on the smoker. I mixed up the spices & sugar, melted the butter in a skillet, added the pecans & spices, and mixed well. On the smoker, in my Weber pan, at 180 deg for 20 min then went to 225 for another 20 min. I stirred them every 10 min. When they cooled I tasted & tasted again & again. I called that my breakfast!!

Went through my carryout to replenish my beer & they had brisket sandwiches done on a Traeger Texan so that was my lunch. I hope it gets to be a regular on the menu, it was great!

I had a 3 lb. bone in Pork Loin Sirloin roast I wanted to do along with some fennel gratin. The fennel gratin recipe also came from saveur.com. I remembered someone on pelletheads forum had said Greek seasoning was good on pork. I found a Greek Seasoning Mix recipe at food.com that looked good to me, & would go well with the fennel gratin. Two hours before cook time I mixed 2 Tbs. olive oil & 3 tsp. lemon juice and rubbed on the roast. I mixed up the Greek seasoning & coated the pork roast well; covered with saran wrap & back in the fridge.

My wife got home & about 6:40 the roast was at 165 deg IT. I pulled & tented it with foil. Added a Tbs. of heavy cream to each half of fennel bulb, a little fresh grated nutmeg, & parmesan cheese, under the broiler until cheese was melted & browning some. I served all with some good crusty bread. The fennel could have been a little more done but tasted great. My wife commented how good the pork was, that seasoning is a winner! The plating lacks color so if serving guests some parsley or green garnish would look good. 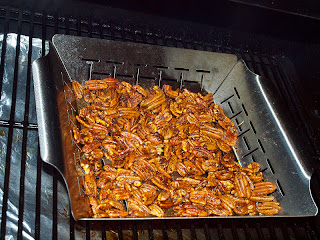 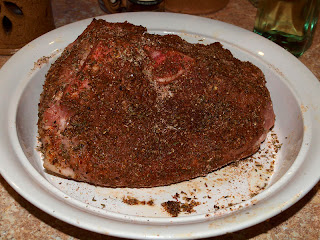 On the Smoker & ready 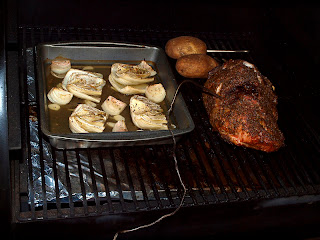 Fennel just off the Smoker 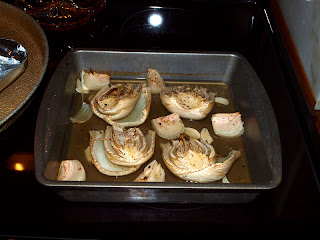 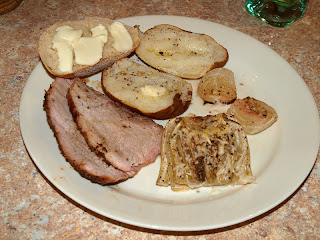 Smokin Don
Posted by Smokin Don at 1:25 AM