My Sunday supper would use one pound of pulled pork I had vacuum packed & froze. I found a recipe for this pie at Tango Joe’s blog. Then found he got the idea from Cowgirl. As much as I have looked at her blog I missed this. I made up my recipe from both, but is closer to one Cowgirl made, Tango Joe’s is more loaded.
I assembled mine in a 9 inch cast iron skillet. I sprayed the bottom & sides with a good amount of cooking spray. I didn’t want the potatoes sticking to the skillet. I sliced up some gold potatoes, being a little waxy I figured they would not stick as easily as white or Idaho potatoes would. I lined the bottom first then the sides with ¼ inch slices, then brushed on some olive oil, a little salt & pepper. I had already fried up about 2/3 of a medium head of chopped cabbage in 2 TBS olive oil and 1 TBS bacon grease. That went in next.
I chopped two slices of sweet onions & mixed with the pulled pork. This went on top of the cabbage. Some Galena street rib rub on top, and drizzled ½ cup of Paula Deen’s BBQ sauce over all.
I then covered the top with a layer of 1/8 inch slices of the gold potatoes, brushed on some olive oil and a little rib rub. My mix of shredded cheddar & cheddar with taco seasoning would go on near the end of the cook.
Neither Cowgirl or Tango Joe gave any cooking temps so this was an experiment for me.
I decided to do at 250 deg, add the cheese when the internal temp was 140 deg or when the potatoes were near done. I put them on at 4:30, and at 5:00 added my temp probe. By 5:20 the IT of the filling was 140 deg but the potatoes were not done enough. I dropped the temp to 225 deg & hoped this would slow down the IT & get the potatoes done. When the IT hit 150 deg I added the cheese. At 5:50 the IT was 160 deg, checked & the potatoes were just about ready. I let it go another 5 min, took it inside & loosely tented with foil and let set 10 min. Total cook time was an hour & 35 minutes. I cut it as a pie & dished up my wife’s first. Her piece came out a lot easier than mine, mine fell apart. I was worried about drying out the filling but wouldn’t have had to, there was plenty of broth. The potatoes that were on top was not quite done so could have cooked longer. I only checked a side potato for doneness.
I am not sure of the best temps to try next, lower & slower or higher from the start.
Other than that the wife & I thought this dish was a winner with outstanding flavor.
We both had a side of salad, & I would have liked some good bread & butter too.
I tasted Paula’s BBQ sauce, good & spicy, in this dish it didn’t pop out as a dominant taste but complimented the flavor overall. I just checked Cowgirl’s blog again & she did give a temp for one done on a Memphis Pro pellet grill, 325 deg but didn’t give a time. 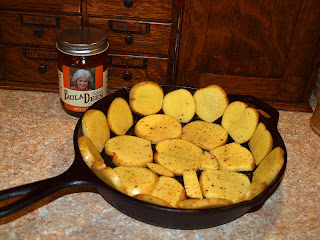 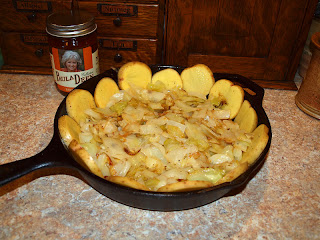 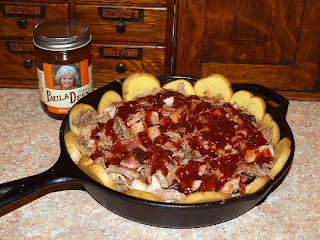 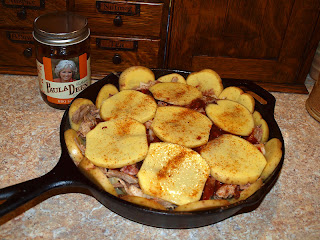 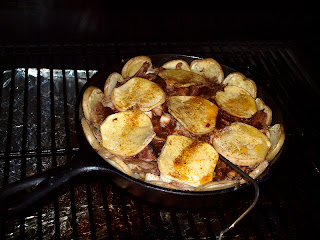 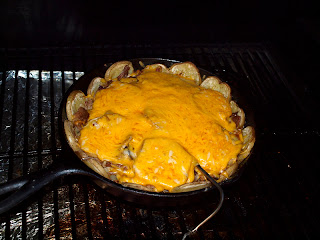 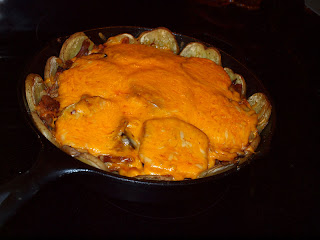 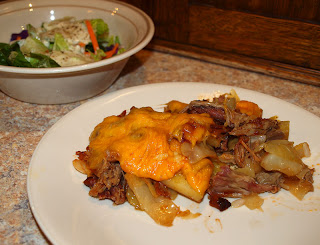 Close up of goodies 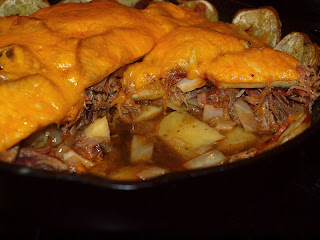