I had been getting hungry for meatloaf. I wanted something different than the usual tomato based one, one with a more beefy taste. I searched my favorite, foodnetwork, & found one by Sandra Lee that sounded good. She calls it Smothered Meatloaf. Hers was done on top of O’Brien potatoes in a slow cooker. I wanted to do it that way but I had already bought 1 ½ lbs of 80-20 ground chuck & ½ lb of sausage. I thought this would be too much grease on top of potatoes. I decided to just use her recipe for the meatloaf, do it on my smoker, then make gravy & fry some Ore Ida O’Brien potatoes to have with it. Her recipe said to use a box of Kraft garlic & herb shake & bake; it comes with two envelopes so I just used one envelope & the same with the Lipton beefy onion soup mix. I mixed up my meatloaf & it was a little wet but I have found they are better on the smoker if they are a little wet.

For the gravy I used the leftover ½ can of cheddar cheese soup, 1 can mushroom soup, & a jar of Heinz fat free beef gravy, heated that up & fried the O’Brien potatoes until browning some. I served the meatloaf & potatoes with gravy and some rosemary focaccia bread & butter. I thought it was very good & my wife said the best meatloaf I made lately. 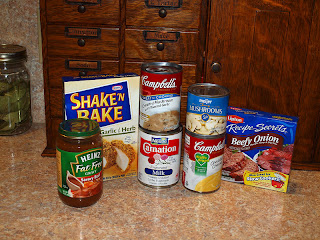 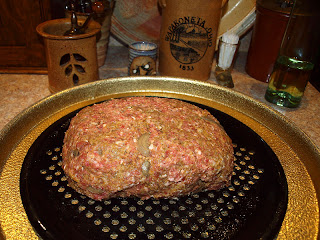 On the smoker & ready 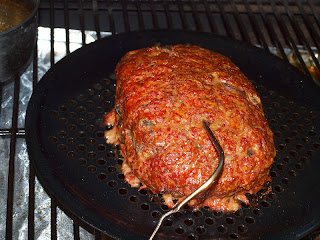 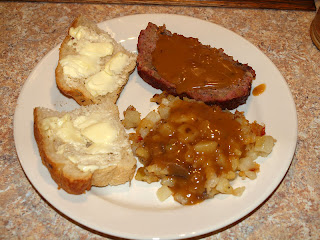