Not a really exciting post but I liked my photo of the ring balogna. As a kid we called it baloney! I remember Tubby Williams ran an ice cream parlor, the old kind with a soda fountain. He had a grill where he made the best fried balogna sandwich, 1/2 inch thick, browned good on both sides, for 10 cents! Now that was awhile back. They were made with the traditional large balogna. I love good ring balogna too, usually just eaten cold on a cracker & some mustard. I have also fried it for sandwiches. My butcher recently started making ring balogna that is very good. I smoked a ring awhile back for 2 hours, came out good. I was making a batch of smoked Cajun crackers so I did some balogna too. I sliced shallow cuts on both sides on half the ring. I thought it would get some more smoke flavor to penetrate into the meat more. The unsliced half was to give to my Mother, she doesn't like heavy smoke flavor. I did this one on smoke 180 deg for an hour & a half, then upped the temp to 275 deg for 20 min. When I checked it had split so pulled it. It looked purdy (pretty) and it tasted just as good! I think it did have more smoke flavor & will do my next one this way. 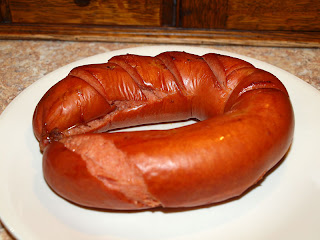 Smokin Don
Posted by Smokin Don at 4:43 AM