Nothing tastes better in the summer than fresh picked corn on the cob unless it’s cooked in a shrimp boil. The corn was picked fresh today. I had a pound of raw shell on jumbo shrimp, a pound of smoked sausage, a pound of new red potatoes, a med. onion sliced open, a bulb of garlic with top sliced off, a lemon cut in half, 2 TBS. Zatarains liquid crab boil and a good TBS. Of Old Bay seasoning. I used 4 ears of corn broken up.

I placed the potatoes and sausage in my pot, added the garlic, onion, and seasoning. I covered with water to cover plus more for adding the rest. I brought it to a rolling boil and after 20 minutes added the corn. In 5 minutes I added the shrimp for 5 minutes. I raised the basket to drain and dumped all on a tray to serve. I had some sourdough bread and garlic butter to serve with it.

The kids and grandson came down to eat with us. The DIL ate a salad & tomatoes but I think she sneacked in there and had some potatoes and sausage! There was just some of the sausage left. It all sure tasted good. The red potatoes take on the garlic and seasonings for an extra good flavor. I hope I can have this once more before corn season is over. 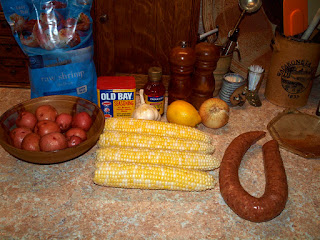 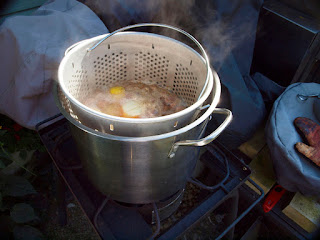 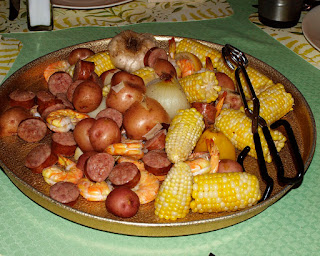 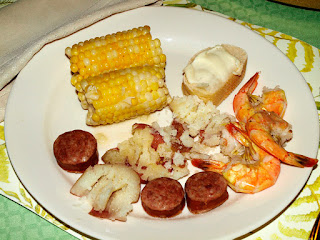