Sometimes when you try a different cooking method it works but this time it wasn’t the best. Usually when I do a beef chuck roast to pull I take it to 160 deg. IT and then in a pan with liquid up halfway on the meat, cover with foil and braise it until the IT is 195 to 205 deg.

This time I decided to wrap with butcher paper for the final cooking. I wanted the beef with just salt, pepper, garlic and onion; this would make it nice to freeze and save for other recipes.

I had a nice 4 pound chuck from my butcher. I trimmed some of the fat and then added Kosher salt to dry brine overnight in the fridge. When ready to cook I added some fresh ground pepper and then on my Traeger heated to 250 deg. Grill level. I got it on a little after 7 AM.

I made some broth with better than bullion. At 11:15 it was staying at 160 deg. I placed it in two layers of butcher paper added some dried garlic, 3 slices of onions for flavor and moisture and I mopped it with some of the broth. It went back on the smoker and upped the temp to about 300 deg. Grill level.

At 1:45 it was up to 196 deg. IT. I removed it to a pan and then in my oven to rest for an hour.
When I tried to pull it I could see it wasn’t going to work so I sliced it up. It had a nice smoke ring and good flavor, pretty tender but not overly moist. I added some of the broth and in the fridge until supper time.

A good neighbor had given me some nice tomatoes and cucumbers. I made some vinegar and oil marinated cukes, tomatoes, sweet onion and garlic. I just by ear and add about ⅓ cup of vinegar and 2 or 3 swirls of olive oil. I used white wine vinegar and like it heavy over the oil.

For supper I had some potato sandwich thins and toasted for sandwiches. We heated the beef in the microwave. My wife had mustard and dill pickles on hers, I didn’t think the dill pickles would go with the sour tomato cuke salad so I had some of the pickled onions on mine. We had some leftover potato salad we finished up too.

In spite of having pulled beef like I wanted the sandwiches were pretty good. 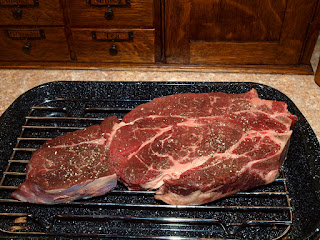 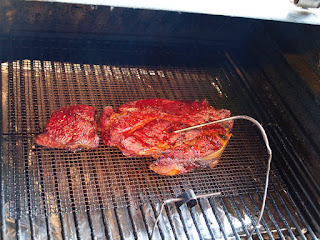 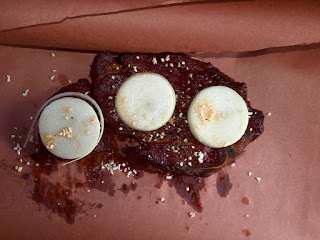 Wrapped on the smoker 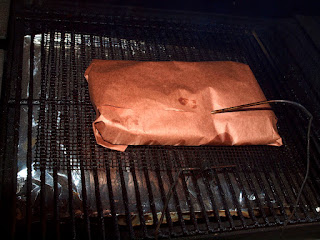 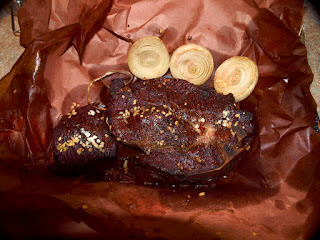 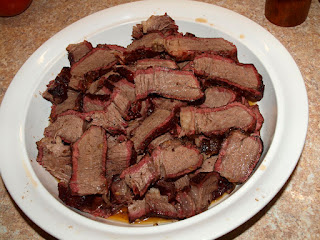 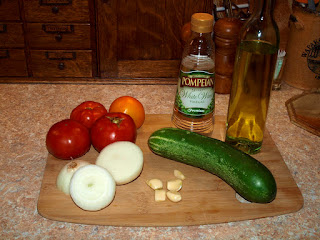 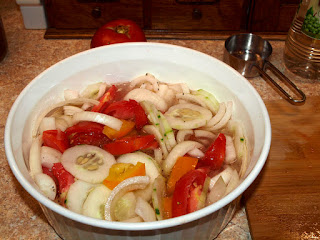 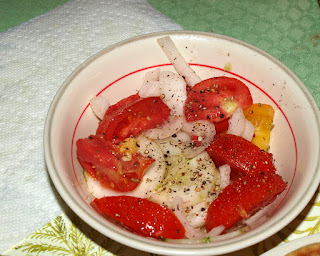 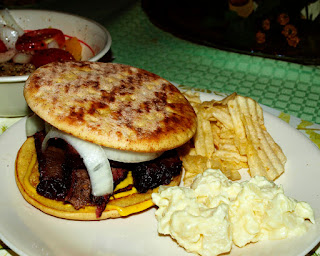