You couldn't ask for a nicer day for Easter; sunny all day and 70 deg. I had smoked my Kassler ham yesterday so all I had to do was warm it up in the Crockpot and prepare all my sides. I had plenty of time to sit out back sip on some beer and enjoy the nice weather.

With the ham I was having, bistro mashed potatoes, dressing, green bean casserole and hot crusty rolls.

I had read on warming up the ham and left it in the double foil wrap; in a Crockpot with a cup of water. It was set on high for one hour then down to low for three hours.

The bistro mashed potatoes were a white yam, a sweet potato and 5 small red potatoes. I peeled them and cut into chunks. I left some of the peel on the red potatoes. They were boiled for 20 minutes and drained. They went back in the pan with 5 pats of butter and roughly mashed, I added some half and half cream, about a ¼ cup and stirred.  You want them a little lumpy. I put them in a Crockpot on keep warm while I fixed the rest of the sides.

My dressing I used a recipe from my wife's cousin Suzie. It is light and not too heavy. French bread, onions, celery, butter and chicken stock. Southerners would probably call this Yankee dressing! I always thought this was Suzie's recipe but she got it from a friend Barb Cole. For today I reduced the recipe some since it makes a lot.

My sides were done so removed from the oven and baked my take home and bake crusty rolls. It was just the wife, daughter and me so I sliced the ham and we got our own plates ready.

I was afraid the ham would be too salty but it was just right, tender and moist. I didn't have gravy for the bistro mashed potatoes but I like them better with a couple pats of butter on top. It turned out pretty good, I think we all got full. For dessert I had a Kroger's rhubarb strawberry pie. 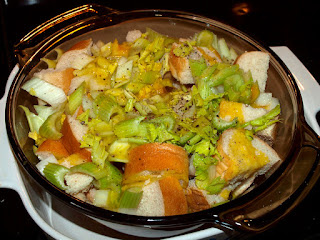 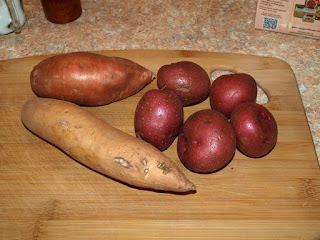 Green beans ready for the oven 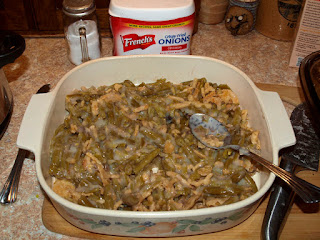 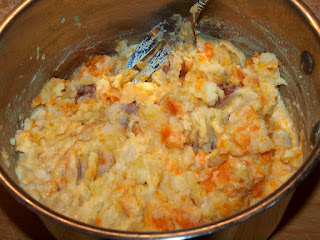 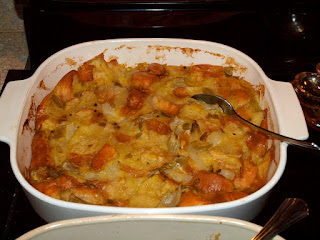 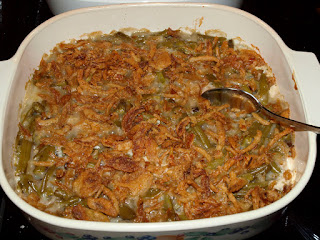 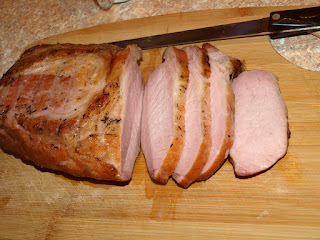 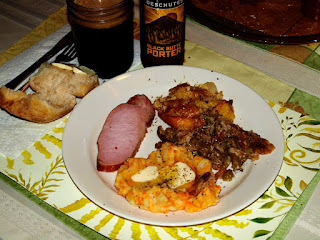