It is always a little in doubt around here when we will have our family Easter meal. Our son and wife do not plan very far ahead! Sometimes we have just gone out to eat. The daughter in law does like to go to her parents too.

I think I have it covered! I just put a pork loin in to brine for a Kassler German Pork Loin. I will be able to smoke it Saturday or Sunday. This is an old German recipe and Kassler ham is still popular in Germany and available at most meat markets.

It is a little like Canadian bacon or pea meal bacon but has more spices added to the brine. I love it sliced thin of thick. Sliced thicker it makes great sandwiches.

I used my injector from Grillbeast for the first time. It is a nice one. I mixed up the brine with just the water, salt, sugar and pink salt, (cure #1) then injected the loin. I added the loin and the rest of the spices to the brine, stirred the spices in, added a plate to keep the loin under the brine and then in the fridge.

Well at 9 AM my pork loin had been in the brine for 70 hours for my Kassler ham. I rinsed it well and then back in the fridge to air dry for two hours. I would have liked to let it air dry longer, I was about a day behind getting this started for Easter.

I fired up my Traeger to 200 deg. and got the loin on at 11 AM. I placed it fat side down. I had a piece I cut off to fit my brining pot so I seasoned it with some Super Pig and Penzey's Cajun seasoning. I figured I would save it for seasoning meat. After an hour I went to 225 deg. and was running 250 to 260 deg. at grill level. I was looking for an IT of 150 deg. and was surprised when it came up in about 2 hours and 20 minutes total. The recipe calls for smoking with alder or beech but I had Lumberjack hickory so I went with that.

My last one took just over 3 hours but was from the large end of a loin and this was from the small end. I double checked the temp with my thermopen and it was done. I double wrapped in foil and in my microwave where it set for an hour. I took it out and let cool some more and then went into the fridge until tomorrow.

Today I will reheat in a Crockpot for my Easter dinner. I left the seasoned piece in the smoker for about 10 minutes more then let it cool some.  I had to try a piece of it so I sliced a piece, dang that was good so I sliced a second piece and then a third! The only negative was maybe a little salty so hope my ham  is not too salty. 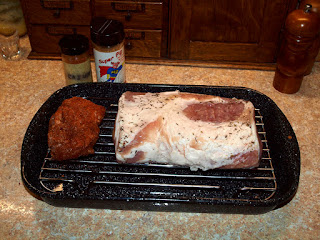 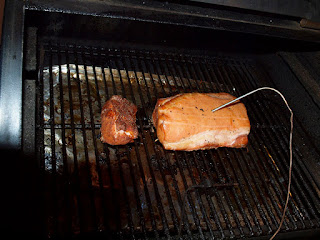 Wrapping in foil. Fat side up 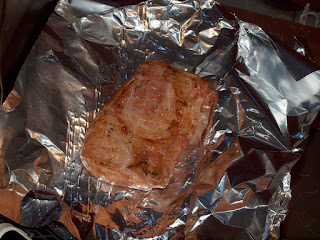 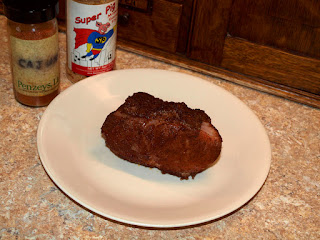 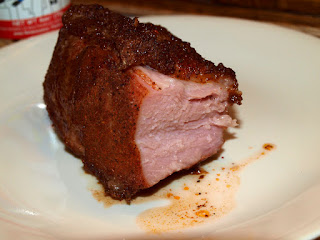