Sometimes the 3rd try is a charm. My first 2 tries they came out too sour for me. I was trying to duplicate some that are on the menu at J Maries; a local restaurant. His was mildly sour and a mild IPA beer taste.

I reread my posts on the first two tries and thought I had just cut back on the vinegar for the second so I cut it some more this time and cut the beer some too. After I had them made I reread my first two attempts and realized I had left the vinegar out altogether. I figured this batch would be too sour too.

After just two days setting at room temp I just tasted them and I thought they were just right. I will put them in the fridge now and let set a few days. 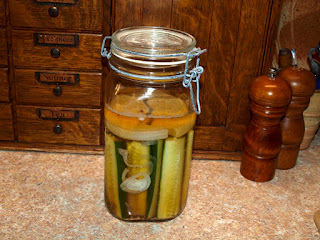