I finally got a nice day to cook out on my new Lodge Hibachi. I had seasoned the inside and grates with lard in the oven. I sprayed the outside with Pam before cooking.

It was 60 deg and cloudy today, some sprinkles delayed me getting it all ready until after 3:30. I had a pound of ground chuck from my butcher for 3 burgers and had some shredded potato cakes to fry.

I had about a half pound of pickled pork I needed to use or vacuum seal and freeze. I thought they would be good cut bite size and wrapped in bacon. Some Super Pig would add a little sweet and heat to balance the sour some. I made them and the burgers up ahead and in the fridge.

I figured I would do up the pork pops first and then into my Traeger at 200 deg. to hold. They browned up pretty fast and then in the Treager. Next I toasted the buns and they went inside.

I added about a tablespoon of lard to my10 inch round griddle to fry the potatoes cakes. They are fried from fozen so wanted get them going before I put the burgers on. I don't think I ever got my griddle hot enough.

I put the burgers on and checked the pork pops; I set the Traeger to 250 deg. about 275 deg. grill level.

I got it all served, we all had lettuce and tomato on the burgers. The brugers were med. rare; mine a little rarer since it was thicker, tasted good. The potato cakes I didn't get browned, crisp, enough. The Pickled Pork Pops were a hit with all of us! I will be making more of them and next time a little heavier on the Super Pig. If you want a great tasting appetizer guys you have to try this,

I used Stubbs charcoal briquettes and lit 40 in the chimeney; I saw that in a video for the Hibachi. That was about 2/3 full in the chimeney. Next time I think I will use a full chimeney. For the potatoes I could have pre-heated the griddle inside.

Sorry I missed getting a shot of my plate.

Making up the Pork Pops 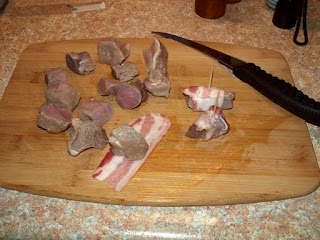 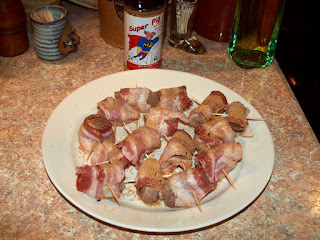 Getting my grill ready 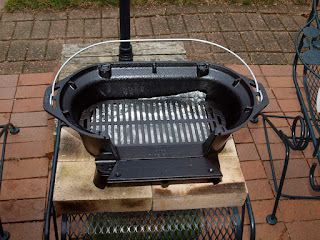 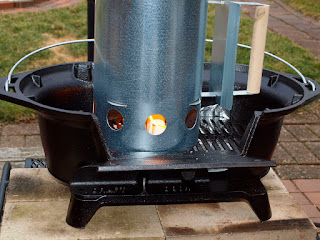 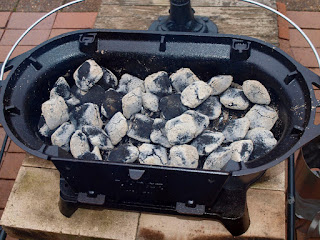 Pops ready to move to my smoker 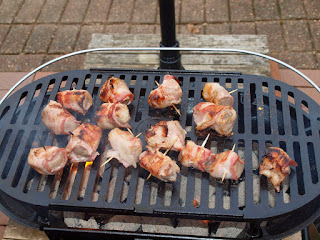 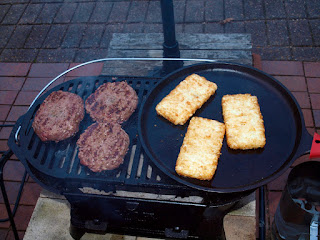 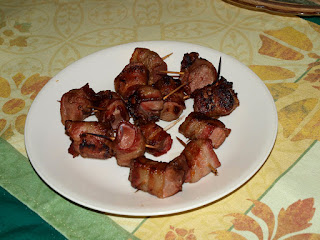