Over 4 years ago when I built my smoke deck I had some nice pieces of 2X6’s left. I built a box large enough to store two 20 lb. gas bottles in and keep out of the weather. It had a top lid I could just lift off. I didn’t realize just 4 years later after having a back operation I could no longer lift the bottles in and out.

I always had a bottle hooked up to a grill and two spares in the storage box. I had a gas single burner but I only had it hooked up in the summer. Last year when I bought a new Weber Spirit 2 burner grill I gave my almost new Weber Q120 to our son along with a full bottle of gas.

This spring I was hobbling around with a cane. I bought a new Camp Chef Pro 30 single gas burner. When I wanted the gas bottle I had to have the son get it out of the storage box for me. I can still roll them around and use a 2 wheel cart to move them. I got a nice cover for the gas burner and wanted to leave it out for the winter.

I looked at the box and after some measuring all I had to do was remove 3 of the front boards and saw the cross piece out of the bottom. Then I screwed the lid on permanent. I was able to slide the gas bottle in and leave my burner hooked up. It’s a comfort to know it’s there and if the snow isn’t too deep and I can get to it I can use it. Before winter sets in I want to buy another bottle and get it filled; I have room in the box for it.

Over the 42 years I have lived here we have only been without power twice in the winter; once for 2 days and once for 3 days. We never lost power during the 1978 blizzard.

The two times I needed it the gas heated water for bathing and gave us some hot meals. Meanwhile as long as I can hobble out to my smoke deck and cookers I am going to keep on smoking and cooking. 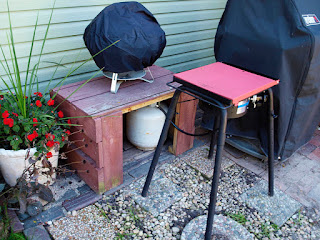