It was not a typical Labor Day meal but we have never had a set thing we did on Labor Day. When the kids were growing up it was a cook out if the weather was good. When they were in college it was usually some brats or pulled pork with some of their college friends. Then for at least 8 years it was a fish fry at my neighbors, he was my beer drinking buddy. I took a double batch of calico beans over and he fried some of the best Lake Erie Walleye and perch all afternoon. He always had plenty and it was all you could eat!

My friend Brad (Sandman) had given me three of his Kielbasa he made using Cliff (TentHunter’s) recipe. Kielbasa usually for me means to have it with fried cabbage or sauerkraut. The sauerkraut would be less work for me so that’s what I fixed. I had been having a lot of sandwiches and summer dishes so some comfort food was due!

I bought a half rack of loin ribs to have too. I seasoned the ribs with salt and pepper and then smoked them on my Traeger for two hours at 180 deg. I threw the Kielbasa on the last 45 minutes. I cut up the ribs and all went on top of a layer of sweet onions in my Crockpot and some dried garlic flakes over them. Next went the one quart of barrel cured kraut, it was store bought. I seasoned with some red sea salt and fresh ground pepper. I set the Crockpot on high and they would cook for 5 hours. I drain the kraut but don’t rinse it so I get a good sour to flavor all. I did add a pint of water.

I cooked some farmer style spaetzel noodles, drained and added to the Crockpot. I stirred them in with the kraut on top. They were in the last two hours and after they were in about 45 minutes I stirred the whole pot to get the onions and meat mixed in. I made up some butter and sour cream mashed potatoes to have; I like the kraut and noodles served over them.

Our son went to a golf outing then a keg party after for the day. The wife, DIL and grandson went to lunch and then shopping. I stayed home to do the cooking! I had a take home and bake baguette for some bread and butter. Our veggie DIL usually likes to have some of the kraut and noodles over mashed potatoes but this time she had a couple bites of the Kielbasa too!

Even though it was a hot day out that tasted great in the comfort of air conditioning! The Kielbasa had great flavor, I think I overcooked it some. Sandman had cooked it then I had it on the smoker for 45 minutes and in the Crockpot 5 hours. I think I cooked too much of the good fat out but the flavor was great!

The half rack of ribs 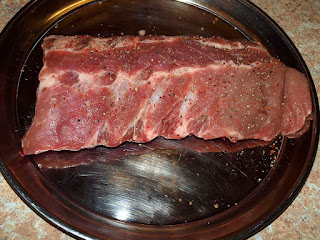 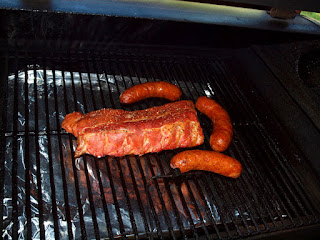 Ready for the Crockpot 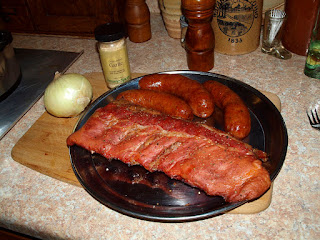 Layering meat over the onions 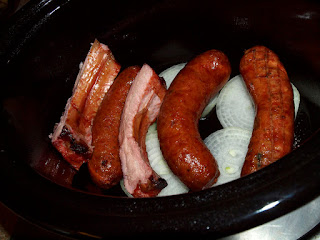 All in with some garlic flakes 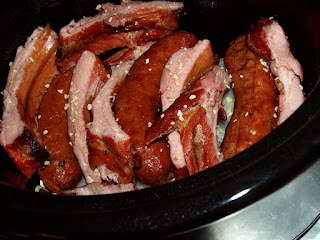 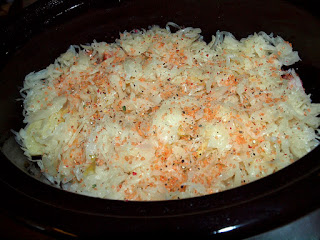 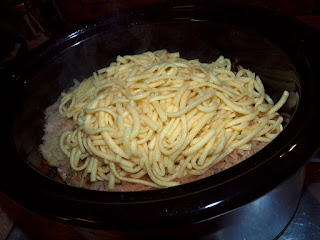 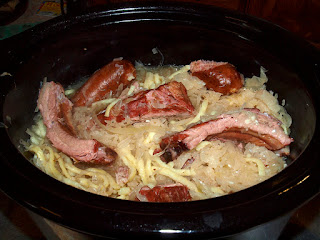 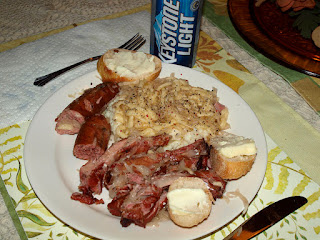