When I was at my butchers the other day he has some nice pork steaks cut so I got two of those. They would be good with fried potatoes and apple sauce.

It was a cloudy cool day so was nicer to be outside. I spent part of the day chopping part of a log in two so I could finish burning it up in my Chimenea. It was a good foot diameter by 4 feet long. When I had to have a Russian olive tree cut down I saved the crotch and part of the trunk. Olive wood has pretty grain and I was always going to make something arty from it. In the 30 plus years it lay under a bench the only one that worked on it was Mother Nature!

I had planned on cooking all outside; I would smoke the pork steaks in my Traeger an hour and half,  get the potatoes frying on my gas burner and sear the pork steaks on my Weber Spirit. I had salted and added fresh ground pepper to the steaks and in the fridge a couple of hours before going on the smoker.

I got the steaks on the smoker and decided with an approaching weather front I better do the potatoes inside. It would also be easier to just sear the steaks inside too. I sliced up enough potatoes for 3 layers in the skillet and some thin sliced onions to place between the layers. I soaked the potatoes in some salt and vinegar water for 15 minutes the drained in a colander to dry.

I can never get sliced potatoes crispy like my wife can but I followed directions this time. When it was time I got the potatoes in my CS skillet with some olive oil and butter. Directions said to cook covered on medium heat for 10 minutes then turn and do another 10 minutes. I checked them at 5 minutes and they were already getting too brown! I turned them over and recovered and turned the heat down to medium low.

I got my pork steaks in from the smoker and had a skillet preheated to sear them on both sides. The steaks were almost too large to get in my 12 inch CS skillet.

We had a side salad and some bread and butter. Pork steaks were delicious; I could have gotten a better sear on the gas grill though. The potatoes were dark brown and soft, not golden brown and crispy like I wanted. Oh well they still tasted good with the apple sauce. Next time the wife is frying the potatoes.

I guess I was too flustered over the potatoes and didn’t get a pic of them browned or the pork steaks in the skillets; the potatoes were not that pretty anyway! 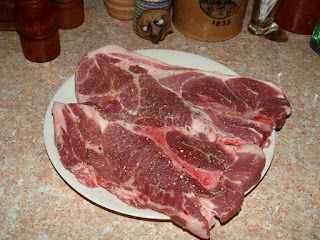 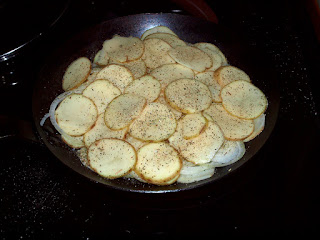 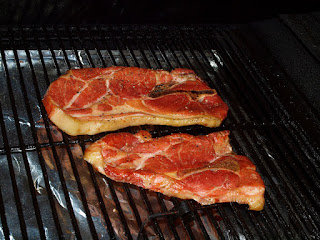 Ready to brown in a skillet 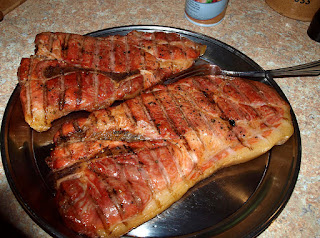 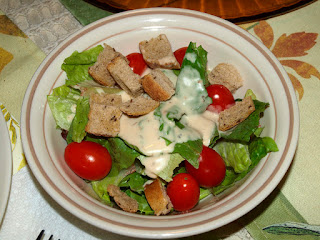 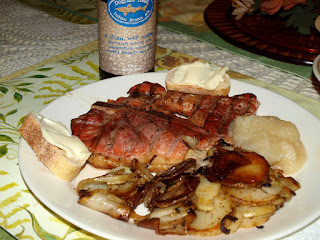