I have wanted to smoke a beef brisket flat since I have not done one for 4 years! I went to Krogers yesterday and theirs was $7.99 a pound and they only only had one small one. I figured Meijers in Lima would have some so I went up this morning. They did but were $9.99 a pound; I am not paying $10 a pound for brisket. I know my butchers are less than that but he only has whole ones.

I drove across town to Sam’s club to see what they had. They didn’t have any briskets but had a 4.75 pound sirloin tritip roast that looked good so I bought it at $5.83 a pound. I split it into two roasts and the smaller one is marinating overnight in the fridge.

I knew I would be tired from running around so I took some pulled chicken out of the freezer this morning. I would throw together some enchiladas for our supper. I had bought some salsa verde to use as my sauce and after tasting I knew it was a little hot for my wife so I didn’t use as much sauce as I usually do.

I know this is not as good as making your own sauce but for something quick and easy you can make some tasty ones with store bought sauce.  This Herdez salsa verde is the best I have tried; it does not give the heat level but I would put it at Medium. I usually pour some sauce in the dish before adding the corn tortillas but skipped that this time.

I used a 7X10 Pyrex dish that just holds six enchiladas. I cut up the chicken some, added it to a soft corn tortilla, topped with some shredded taco cheese, folded them up and placed in the oiled dish. I added some more of the cheese to the top and poured some of the salsa verde over all.

This went in my Traeger heated to 300 deg. grill level. After 25 minutes I added some of the Queso Fresco crumbled cheese, about ½ cup. I went to 320 deg. grill level for another 40 minutes; the cheese was melted and getting a little brown.

I sprinkled on a little Penzey’s sandwich sprinkle and served it with some sour cream on top. I had a salad with some blue cheese dressing with mine. It was pretty good for something quick and easy to make. This is probably just as good done in the oven, I don’t think I got much smoke flavor added but it was a nice day and I enjoyed sitting on my smoke deck with a beer while it was cooking! 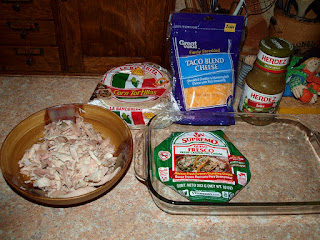 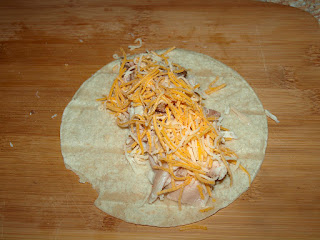 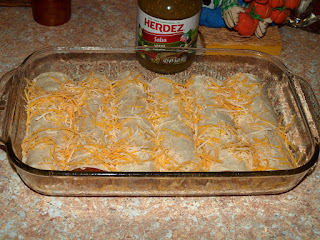 Some salsa verde poured over 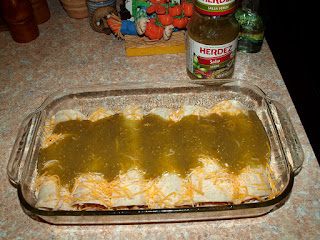 Ready to top with cheese 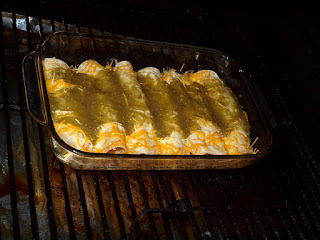 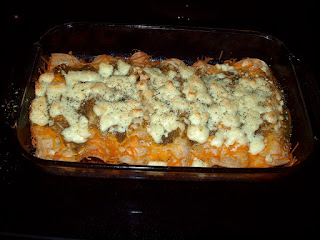 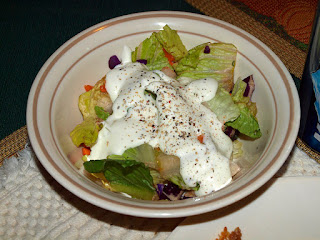 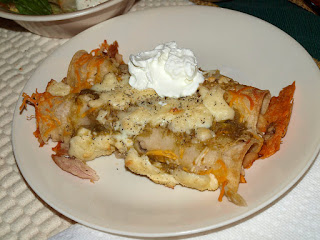