I get a craving for chili dogs once in a while. Since my last order from Penzey’s I had a jar of their Original Taco seasoning I wanted to try out. I thought why not try using taco meat instead of chili on a hot dog.

My hot dogs were a little different too, I used some Bockwurst from my butcher; he calls them Coney Island dogs. I had some brat buns from our local Walmart bakery to use. For a side I had Mac n cheese.

I was going to use my Lodge CI Hibachi so I had it set up with ¾ a chimney of Stubbs briquettes set up in the grill ready to light. I had a pound of ground round I got frying in my CI skillet and went out and lit the briquettes.

When the beef was getting browned well I added 3 good TBS. of the taco seasoning and stirred it in. When it started to stick to the bottom I deglazed the skillet with some beer. The directions said to use water but I thought beer has to be better! I kept a check on it and added a little beer when needed as I did the bockwurst.

I dumped the charcoal in the grill, added the top grate and sprayed with a little olive oil. I went inside and got the bockwurst and buns ready to go.

I had sliced the buns almost through and cut just enough off the top so they set square on the grill to toast. I sprayed them with olive oil and got them toasted. I added the bockwurst turned a few times and cooked until well browned and starting to split open some.

I heated up the Mac n cheese and made our sandwiches. My wife had taco meat and shredded cheese on hers. I had one that way and one with taco meat and chopped onions. Mine had a layer of mustard in the bun, when I have brats or hot dogs there have to be some mustard involved.

Tasted pretty darn good! I ate the one with cheese first and only got ¾ of the second one down! I think for any chili dogs staying with hot dogs would let you enjoy more of the sauce on it. Then I could eat two!

For the Taco dogs 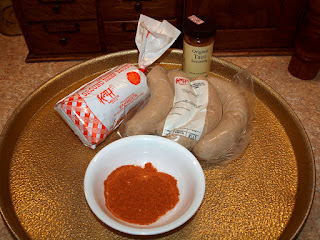 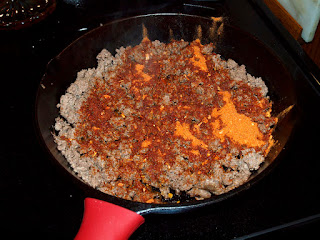 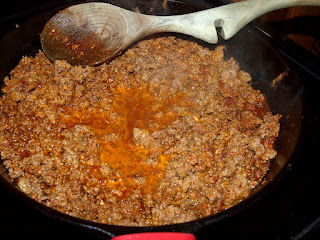 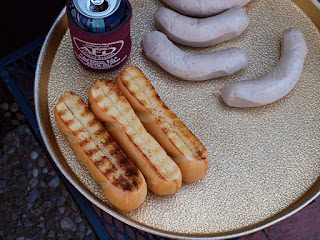 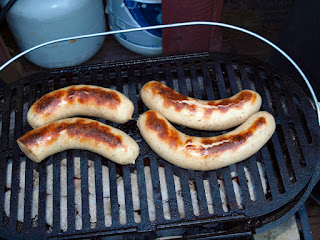 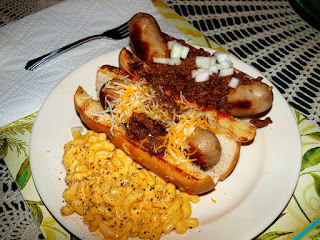