Recently on LTBBQ forum member Scally posted about using baking powder to help crisp up chicken skin. I thought we had tried that and searched; 3 years ago Smoke did some and posted the recipe. I found the post where I had tried it and I said I liked it but I haven’t tried it since!

With renewed interest I decided to try it again. I had also read to marinate chicken in vodka to get crispy skin. I decided to give that a try too. I had a split friar so washed and trimmed it some and into a zip lock bag with a cup of Pinnacle vodka overnight in the fridge and turning it some.

It had been in over 12 hours so I took it out and placed on a rack in a pan and back in the fridge for several hours to air dry. I fried up some diced bacon to make our favorite pea salad for a side. I cheated and used some Bob Even’s mac n cheese for our other side.

I cut up the chicken, dipped in the egg, buttermilk mix and then the seasoned flour with the baking powder. I had a foil pan that I melted a Tbs. of bacon grease and a Tbs. of butter and added. The chicken went in skin side down and then in the fridge about 2 hours before cooking.

I heated my Traeger up to where I was running 375 to 380 at grill level temp. The pan of chicken went in for 30 minutes then turned the chicken and went to about 340 deg. grill level for another 30 minutes. I checked with my thermopen and all was getting to temp with 10 minutes to go. I went inside and got ready to serve and heated the mac n cheese in the microwave.

I let the chicken set a couple minutes then served the wife a breast and the sides. I had a leg, a thigh and a wing that had some of the wishbone meat. It all was good the chicken was moist and tender. The skin was kinda crisp and was eatable. My wife and I both thought we tasted something a little different. I think it was the vodka. Vodka is supposed to be tasteless but the Pinnacle vodka made from wheat does have a distinct taste to me. Next time I will drink the vodka and do a simple salt brine!

To be honest after over 40 years cooking chicken on gas grills and 3 different types of smokers I have never achieved crisp skin like you get when deep fried or skillet fried. When I want good crispy skin I go to Sandman’s carry out and get his broasted chicken! 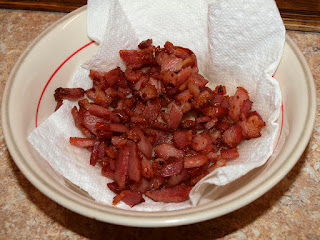 All in for the pea salad 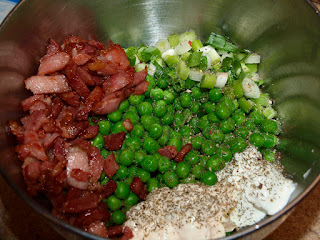 Chicken ready for the smoker 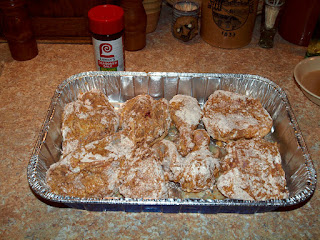 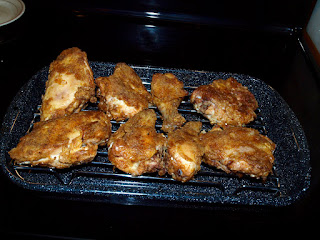 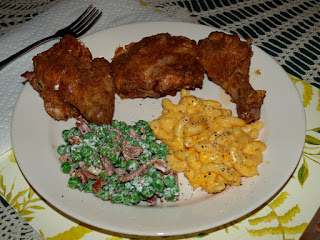