I took the car through the car wash this morning and stopped at Sandman’s for some beer. He gave me a couple of ribs to try he had done on the PBC. That was my lunch and sure was good. It’s a different smoke flavor than I get on any of my cookers and enjoyed them.

After lunch I went and picked up some flowers to plant. I got my wife set up and she planted them for me. I went and took a nap!

My supper would be an easy cook; kraut brats and pierogies. I had found a recipe for grilled pierogies and wanted to try it. The brats were from my butcher and the pierogies were Mrs. T’s four cheese and mashed potatoes. I would rather have some homemade ones but Mrs. T’s are pretty good and I don’t do dough well.

My plan was to smoke the brats for an hour on my Traeger then do the pierogies on my Weber Gas grill and finish the brats on it too.  Some rain moving in from the south made me change to just using my Traeger. The brats went on the Traeger at 190 deg. for an hour.

For the pierogies; I did them without thawing, a large sliced Vidalia onion, poured some olive oil over. They went in my weber grill basket after the brats were on an hour. I went to 300 deg. and was getting about 350 deg. grill level.

I melted 3 Tbs. of butter, a large teaspoon of dried parsley flakes and added some salt and pepper. After the pierogies had been on 20 minutes I poured the butter mix over and stirred to coat. I checked the brats and they were done so I put them on top of the pierogies and all was on another 20 minutes stirring half way.

We had toasted English muffins and some cold artisan sauerkraut with them. I had mixed equal parts of stone ground mustard and mayo along with some good shakes of Cholula hot sauce mixed to have with my brat.

This was quick and easy and pretty good. I still want to try grilled pierogies but will use the Traeger for something quick. I think the next time I would thaw the pierogies in hot water for the smoker and might get some better browning like I get when doing in a skillet. Total cook time was an hour 40 minutes and there was very little prep. 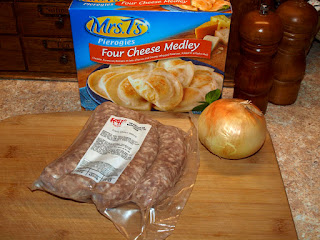 On the smoker & about done 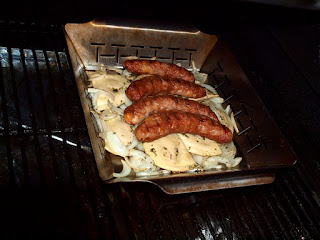 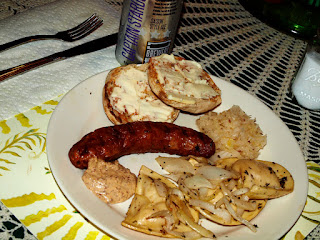