Knowing it was going to be extra cold today I slept in. My wife and I were both up and she said school was canceled today. She asked if it was going to snow more and I said no. She said I may call Gavin, our grandson, and see if he wants to go to Lima to a movie this afternoon. Lima is about 20 miles away. I said no, when they cancel school because of cold that means 72 year old grandmas stay home!

I was not sure what we were going to have for supper. I thought about getting carry outs but didn’t want to go out in the cold to get it, the high today was 18 deg. F I told the wife I thought I had enough to throw some chicken and noodles  together.

I checked the freezer and had a backbone and a large breast half. I had a half pound of good noodles, onion, celery, carrots and about a cup of chicken broth. I threw the backbone, and onion and two stalks of celery in a pot of water and boiled for 45 minutes. I strained it and added the little bit of broth I had, salt and pepper and poached the breast about 20 minutes. I removed the breast to cool and added the noodles and some diced carrots. After the noodles had cooked about 40 minutes I diced up the breast and added it back in. After it came to a boil I covered and turned down to simmer until time to eat.

I had some potatoes that needed used so I made mashed potatoes with butter and buttermilk. I had some Grand’s biscuits I baked for some bread and butter. My wife wanted soup so she had it as soup with some crackers and butter. She always adds some ketchup to her chicken and noodle soup; I won’t try that it sounds awful. I used a slotted spoon and had mine over mashed potatoes. It tasted pretty good for just throwing some stuff together, especially on a cold night! 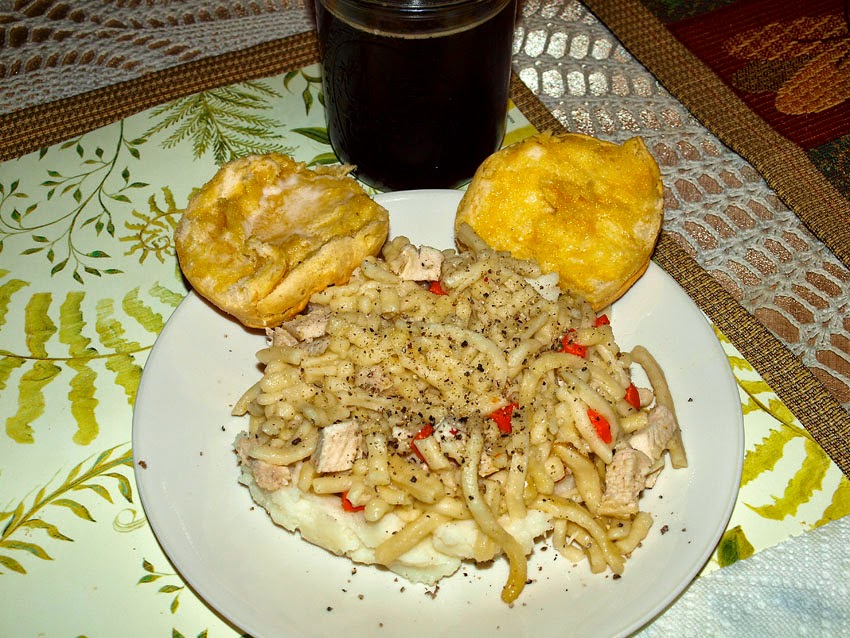